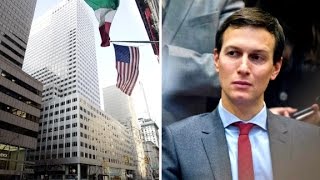 Donald Trump may be able to claim he has no relationship to the people in the indictments that Robert Mueller handed down last Friday. He'll have a little more trouble should the paperwork turn in a new direction.

"Special counsel Robert Mueller's interest in Jared Kushner has expanded beyond his contacts with Russia and now includes his efforts to secure financing for his company from foreign investors during the presidential transition, according to people familiar with the inquiry."

Kushner put himself, his family, and his entire company over a barrel with a miserable deal on the property at 666 Fifth Ave. The deal extended Kushner's borrowing power past the breaking point, and even his reluctant partners on the deal ... are pretty much done with deal.

"Kushner had bought the property in 2007 in a mostly debt deal valued at a record $1.8 billion. ... The office tower shoulders more than $1.4 billion in debt, according to a report Vornado released in March."

"The White House and a Russian state-owned bank have very different explanations for why the bank's chief executive and Jared Kushner held a secret meeting during the presidential transition in December."

It might be expected that the White House would disclaim any connection to the meeting. But that's not what happened. Vnesheconombank said the meeting was about Kushner's real estate company, but Trump claimed the meeting wasn't personal at all. It was about "diplomatic outreach."

Why would the Trump White House want to claim a meeting with a bank deeply connected to the Kremlin and Putin? That's a really, really good question. One that also seems to interest special counsel Robert Mueller.

Related Topic(s): Jared Kushner; Meeting; Mueller Investigation, Add Tags
Add to My Group(s)
Go To Commenting
The views expressed herein are the sole responsibility of the author and do not necessarily reflect those of this website or its editors.