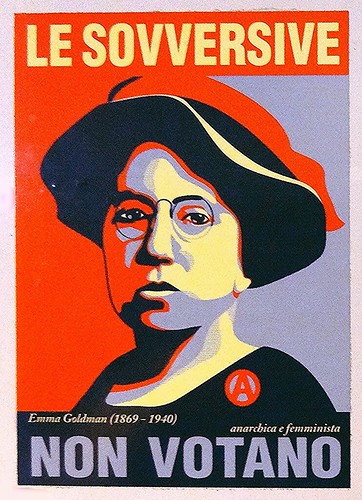 Le sovversive non votano - Emma Goldman
(Image by Revolweb)   Details   DMCA
e that alternative journalists would spend even a minute writing about the ongoing Democratic Party debates. They are meaningless and they are not debates. How many times do we have to go through this ridiculous charade before this can be accepted once and for all? The "debates" are farces, total theater, as are the Presidential elections. They don't matter. The political quiz show of duopoly is fixed. Discussing who has won is the height of absurdity. It legitimizes the system of oppressive duopoly. It is political "jeopardy," and only the fixers win when they suck us into watching and opining. One expects the corporate media to do their jobs and drone on endlessly about nothing, but not those who oppose this anti-democratic sham.

Emma Goldman is alleged to have said, "If voting changed anything, they'd make it illegal." She was right then and is right now. With the exception of JFK, who was assassinated by the national security state when in his last year he radically turned against its war agenda, not one American president since has posed the slightest risk to the systemic power of the elites who own and run the country. If anyone ever did, they would not be on the ballot or in office. Here and there, a candidate running for the nomination of one of the ruling parties makes it into a debate only to be marginalized for bluntly attacking war policies e.g. Tulsi Gabbard in 2019. Those who enjoy the support of capitalism's invisible army (the CIA) and Wall Street's corporate merchants of death are allowed to present nuanced "anti-war" positions that their backers know are lies but suckers bite on in their desperation to believe that the system works e.g. Obama in 2008.

Because Emma Goldman opposed the U.S. war and conscription policies during World War I, she was charged and imprisoned under the Espionage Act in 1917, "for conspiring against the draft," a form of state imposed slavery. Like Chelsea Manning and Julian Assange, she was punished for telling the truth to the American people and the world. To contemplate their confinement in these prison hellholes sickens the soul.

When I was young and was seeking release from the Marine Corps as a conscientious objector, I spent quite some time pondering prison life, something I was expecting and preparing for but surprisingly avoided when the Commandant of the Marines released me so I could "take final vows in a religious order." It was an outright lie, something I never mentioned in my C.O. application, but it allowed them to save face while getting rid of a troublemaker. Ironically, as a religious young man, I had often thought that the life of a Catholic priest or nun, in their respective celibate rooms in rectories or convents or monasteries, was similar to the life of a prisoner, and it struck me as very depressing. Even a few years in a federal prison felt more liberating, so I steeled myself for that possibility by reading Cleaver's Soul on Ice, and Bonhoeffer's Letters and Papers from Prison, among others, and disciplining myself physically, mentally, and spiritually for what never came to pass.

Now the world is our prison, as John Berger wrote in 2005 in a stunning article with the understated yet hopeful title, "Meanwhile." Because he was not caged by traditional categories of conventional thought but just wrote, trusting that words were winged creatures that rise and fly out of sentences into the unknown, Berger was able to discover truths that many feel but cannot articulate. Often referred to as a Marxist art critic, such a description fails to capture the liberated nature of his writing, even when he is describing how we are imprisoned:

"I'm searching for words to describe the period of history we're living through. To say it is unprecedented means little because all periods were unprecedented since history was first discovered".The landmark that I've found Is that of a prison. Nothing less. Across the planet we are living in a prison".No, it's not a metaphor, the imprisonment is real, but to describe it one has to think historically".Today the purpose of most prison walls (concrete, electronic patrolled or interrogatory) is not to keep prisoners in and correct them, but to keep prisoners out and exclude them".In the eighteenth century, long-term imprisonment was approvingly defined as a punishment of 'civic death.' Three centuries later, governments are imposing by law, force, economic threats and their buzz mass regimes of civic death".The planet is a prison and the obedient governments, whether of the right or left, are the herders [US prison slang for Jailers]."

At the heart of this prison system is financial, not industrial, capitalism, and the system of globalization fueled by the Internet that allows speculative financial transactions to be continually performed instantaneously. Speed is the essence of cyberspace, a placeless "place" that allows this worldwide prison system to operate. Space, time, nationalities, local traditions, and idiosyncrasies of any sort are washed away by this tyrannical flood of abstract power controlled by the jailers and their henchmen in and out of governments. This planetary prison's "allotted zones vary and can be termed worksite, refugee camp, shopping mall, periphery, ghetto, office block, favela, suburb. What is essential is that those incarcerated in these zones are fellow prisoners."

The prisoners that are us are often just dimly aware that they are prisoners, but dimly is better than unaware. For the jailers also use cyberspace to misinform, confabulate, lie, confuse, and convince the prisoners that they are not in cells but are free on their cells and had better be on constant alert to protect themselves and get theirs, theirs always being some commodity, which comes in many forms, including political candidates, sometimes "new and improved" and sometimes just "bright and new." The prisoners are always free to choose more of the same, if they can be conned. While everyone "knows" these candidates sell themselves and that's what debates are about "if you liked that (one), you will like this (one)" the jailers create what Berger calls "a hallucinating paradox" that keeps the prison population believing that the rigged system somehow works for them since they are exceptions to the rule that renders others moronic suckers.

Related Topic(s): Alternative; Duopoly; Liberty; Political Art; Political Elite; Political Mythology; Political Prisoner; Prisoners; Refuse; Writers, Add Tags
Add to My Group(s)
Go To Commenting
The views expressed herein are the sole responsibility of the author and do not necessarily reflect those of this website or its editors.