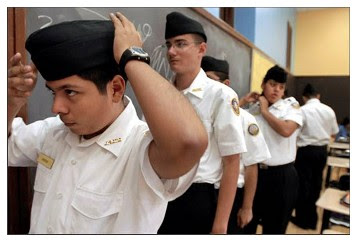 (Image by Unknown Owner)   Details   DMCA
The military is moving to take over our public schools. All across America the Army, Navy, Air Force, Marines, and the Space Command are worming their way into control of schools. Even in other countries a similar move is underway to militarize education.

As local communities face fiscal crisis and job losses they are forced to cut back on education spending. As they cut funding parents worry about what kind of future their children will have.

From Chicago to Colorado Springs, from Hawaii to Atlanta this trend is accelerating at a break neck pace.

According to the Associated Press, "The Marines are talking with at least six districts - including in suburban Atlanta, New Orleans and Las Vegas - about opening schools where every student wears a uniform, participates in Junior ROTC and takes military classes."

Of course these military schools are targeting the poor and minority communities who have declining tax bases and growing unemployment. Rich kids, who attend well funded white schools, need not apply.

The Chicago school system, where Obama's Secretary of Education Arne Duncan was a big booster of military schools, has opened five public schools since 1999 based on a military academy model. Over 10,000 students attend the schools, which offer college preparatory courses combined with a military curriculum.

An article, published by The Raw Story reported, "Pauline Lipman, a professor at the University of Illinois, is disturbed by the almost exclusively minority and inner-city focus of the program. 'Why are they good schools for low-income, African-American and Latino students and not good school for affluent white kids?' she asks. 'Are we saying that those students need a different kind of discipline?'

"Lipman and Darlene Gramigna of the American Friends Service Committee are both concerned about the militarization of the school system and suspect that the program is intended as a tool for military recruitment. 'It would be really naive to think that the military would, in fact, be expanding these schools and these programs if the schools were not about recruiting students,' said Lipman."

This is how Hitler did it in Nazi Germany. He went after the youth and indoctrinated them in the ways of the military. Mussolini in Italy followed Hitler's model of youth indoctrination in order to create generational support for his fascist state.

An old friend in Germany told me that she never questioned Hitler's youth movement as a vehicle for her Nazi indoctrination. It was what all the other kids were exposed to as well and it all seemed normal she said.

When you remember that the Pentagon is saying that America's role under corporate globalization will be "security export" this all begins to fit together.

The military industrial complex is militarizing the culture of our nation to prepare for endless war. It is not just about recruiting. It is about creating automatons - children that follow orders whether in the military or in society at large. They want to create kids who learn to obey the oligarchy. They want citizens who support everything war.

Watch out for free gifts from Mr. Big.

Related Topic(s): Alternative; Education; Education; Education; Funding; Hitler; Indoctrination; Marines; Militarization; Military; (more...) Mussolini; Navy; Oligarchy; Pentagon; Recruiting; School, Add Tags  (less...)
Add to My Group(s)
Go To Commenting
The views expressed herein are the sole responsibility of the author and do not necessarily reflect those of this website or its editors.