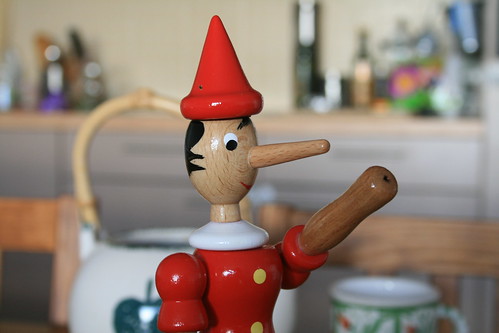 Pinocchio
(Image by jepoirrier)   Details   DMCA
Perhaps Donald Trump's greatest talent is his ability to feed fake news to his fans without interference from the mainstream press. In his signature move, he piles on a bunch of smaller lies and then follows up with an outrageous statement. The press then covers the controversy while ignoring the other nuggets. Meanwhile, his base reads them, sees that they have not been refuted and accepts them as truth. Perhaps this is one explanation for the fact that while his approval rating sits at a historically low 42%, only 2% of his voters regret their decision.

This weekend's events marking Trump's first 100 days in office provides an example of the problem as the press gets lost in their coverage of his "deeply disturbing" speech in Harrisburg while ignoring Trump's weekly address. Meanwhile, this address contains outright lies that feed Trump's alternate reality. Since our impotent press has failed to provide any type of fact-checking, I'll do their job for them:

"My fellow Americans, I truly believe that the first 100 days of my Administration has been just about the most successful in our country's history.

Pinocchio
(Image by jepoirrier)   Details   DMCA
If Trump is not lying with this opening statement, then he is surely delusional. The hundred-day was initiated during the FDR administration as he responded to the crisis of the Great Depression and acted accordingly. Obama faced a Great Recession that was threatening to deepen and acted quickly by ushering in a stimulus package. Even if Trump had the ability to display this type of leadership, the circumstances of a deep, overwhelming crisis do not exist that would enable him to unite the country around a solution.

Trump was handed an economy that "has gained jobs for 75 straight months -- the longest streak on record." When Obama left office the unemployment rate stood "at 4.7 percent". To put that in historical perspective, "in all the months since 1948 the median jobless rate was 5.6 percent." Therefore, to say that Trump is "bringing BACK jobs" is in itself a violation of the truth.

While Trump likes to take credit for everything good that has happened since the beginning of the year or even since his election, there have only been two full months of economic reports since he actually took office. The February jobs report showed that 237,000 jobs were created in the first full month of Trump's presidency, 1,000 LESS than the amount that was created in February 2016. "Employers pulled back sharply on hiring in March", creating only 98,000 jobs. In March 2016, 225,000 jobs were created.

Our country is going up and it's going up fast. Our companies are doing better they just announced fantastic profits all because of what's happened in this rather short period of time.

And that's just the beginning. We're putting in a massive tax cut for the middle class and for business. It's going to have an enormous effect.

Trump's "plan" was nothing more than an outline on a single sheet of paper. When asked on ABC's Good Morning America, Treasury Secretary, would not "guarantee that middle-class families wouldn't pay more under the proposal."

The massive Keystone Pipeline, the Dakota Pipeline tens of thousands of jobs right there. And so many other businesses. We're really proud of what we're doing.

According to TransCanada's bid for the permit, only 50 permanent jobs will be created to maintain the Keystone pipeline. It will also increase our trade deficit as it will be built to import Canadian oil into our country. "Just 40 full-time permanent positions will remain upon the conclusion of construction on the DAPL". Despite previous assurances, neither project will require using American made steel.

The F-35 fighter jet program it was way over budget. I've saved 725 million dollars plus, just by getting involved in the negotiation. We're cutting costs, and we're going to have a truly competitive and great country again.

The F-35 Joint Strike Fighter is a $400 billion program. Interestingly, Trump had just bragged on Monday that he had saved $700 million from this program, making this seem like nothing more than the tall tales of weekend fishermen. Additionally, these projected savings are not contained in a contract but in the "personal assurance" of Lockheed Martin CEO Marillyn Hewson. The General Accounting Office says that due to "cascading testing delays" the project "could cost the Department of Defense more than a billion dollars more than what was budgeted in 2011 when the program was restructured."

Related Topic(s): Donald Trump Lies, Add Tags
Add to My Group(s)
Go To Commenting
The views expressed herein are the sole responsibility of the author and do not necessarily reflect those of this website or its editors.