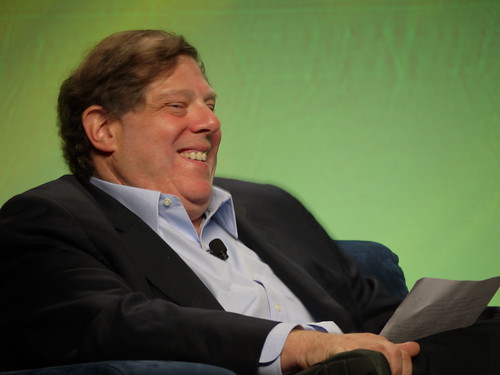 Whatever else you might want to say about the corporate types who dominate the Democratic Party, you've got to give some of them an "A" for audacity. The latest to register for top scores are Mark Penn and Andrew Stein who have raised the cry, "Back to the Center, Democrats" in a New York Times op-ed piece.

Now, in case any of you have forgotten, Bernie Sanders did not actually win the Democratic nomination. It was the centrist Hillary Clinton who did; the Clinton who lost to the most unpopular major party presidential candidate since the start of polling on such things; the Clinton that the establishment Democrats stuck with despite virtually every poll saying that Sanders ran stronger against Donald Trump than she did.

Given that Penn's byline says that he "served as pollster and senior adviser to Bill and Hillary Clinton from 1995 to 2008," you'd figure he might remember that, but apparently not. In fact, Hillary Clinton appears nowhere in the these two gentlemen's telling of the story of what has led to the decline of the Democratic Party in recent years.

They tell us that "Democrats lost over 1,000 legislative seats across the country and control of both houses of Congress during the Obama years." Why was that? Well, it appears that one of the problems is that "Candidates inspired by Senator Bernie Sanders, Senator Elizabeth Warren and a host of well-funded groups have embraced sharply leftist ideas." The fact is, of course, that any candidates inspired by the above mentioned Senators have attempted to stem the previous years' decline of the Democratic Party dominated by precisely the"centrist" views the authors are promoting.

Indeed, the political terrain these writers describe is barely recognizable even though they speak of events that occurred just last year. For instance, they decry the Democrats' "loss of support among working-class voters, who feel abandoned by the party's shift away from moderate positions on trade." From this, you'd never know that the presidential candidate whose name is apparently not to be mentioned is generally thought to have lost working class support to Trump precisely because of her "moderate," establishment, pro-NAFTA position on trade which these gentleman embrace.

They assert, reasonably enough, that in health care the Democrats "have a coherent message about protecting the working poor from losing coverage," and yet, just like the 2016 Democratic standard bearer, they have nothing to say about adopting a plan that would actually offer the type of universal coverage that every other industrialized country already has. And they argue that somehow the left is apparently responsible for the fact that "in special elections for Congress this year," Democrats "failed to take back any seats held by Republicans" -- even when the candidates were centrists like Georgia Democrat Jon Ossoff, who also declined to support a single-payer, universal health insurance program.

It's a truism that the publication of op-ed pieces in newspapers like the New York Times has more to do with the details contained in the authors' bylines than in the quality of the ideas in the text above. Which makes one think that the editors involved might take a deeper look into the authors' bonafides. So far as Penn goes, the Times editors are probably not terribly off -- his resume also includes work for former U.K. Prime Minister Tony Blair, the British equivalent of Bill Clinton, former right wing Israeli Prime Minister Menachim Begin, and a stint as a Microsoft executive -- pretty much what you might expect from a corporate Democrat arguing a "centrist" line. Stein's credentials seem a bit shakier, though. Identified as "a former Manhattan borough president and New York City Council president," he also once (unsuccessfully) sought the support of the Republican and Conservative Parties to challenge David Dinkins, a Democratic Mayor of New York City. Subsequently he pled guilty to lying about his involvement with Ken Starr, who did time for his role as a Ponzi scheme financial advisor to the stars.

Still, none of that would matter for much, if the authors had any kind of coherent message, but given that they are arguing a typical centrist corporate Democrat line while using a variety of pseudo-proletarian covers -- opposing "[i]dentity politics, class warfare and big government," that is never really a possibility. Perhaps they figure that this matters for little these days, given that the current state of White House politics is such that truth, honesty and consistency count for little. Let's hope that they are wrong. Certainly we Sanders Democrats, who supported a candidate who actually argued the pro-working class views which these confused-at-best writers claim to espouse, think that they are profoundly wrong.