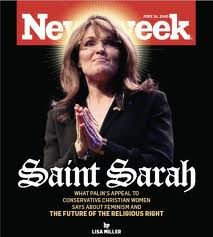 Members of Congress spent today's session memorializing the victims of the Arizona massacre, President Obama spoke in Tucson in tribute to the victims as Rep. Gabrielle Giffords fights for her life following a crippling gunshot to the head, and a devastated Tucson community prepares to shield mourners at little Christine Green's funeral from the ultimate Christian Hatemongerer -- Fred Phelps -- and his obscene followers who plan to "protest" homosexuality at her service. As these humble events unfolded today, Sarah Palin, too, was taking the situation to heart. To her, this is personal. To her. Just to her. Because it's really about her, as is every other human event occurring in North America.

The mighty Sarah Barracuda ascended the podium and braved the klieg lights for eight self-serving, uninterrupted, pointless minutes to invoke the First Amendment and defend her sacrosanct right to target members of Congress with gunsight crosshairs on her website.

In recent days the Neocons have spent many blustery hours bloviating on the telescreens denouncing the "left" for using this tragedy for their own political gains. How will they explain today's performance by their own poster girl?

In a display of malignant narcissism only she can fully demonstrate, Sister Sarah stared into the camera and piously claimed personal victim-hood in the Arizona tragedy, whining over the wounds she has suffered from unfounded "leftist" attacks resulting from the blatantly incendiary graphics and "don't retreat -- reload!" rhetoric she posted on her website that were a call to arms to her minions to "target" Rep. Gabrielle Giffords (among others) for attack.

"Like many, I've spent the past few days reflecting on what happened and praying for guidance. After this shocking tragedy, I listened at first puzzled, then with concern, and now with sadness, to the irresponsible statements from people attempting to apportion blame for this terrible event." Stay classy, Sarah.

Rep. Giffords knew she was a literal target of Sarah Palin, and stated this fact on MSNBC after her Tucson office was attacked last March by rabid Palin-inspired Teabaggers who, in typical knuckle-dragging fashion, smashed in her office window. Camp Palin never decried Ms. Gifford's very valid concerns about such violent targeting then, and never removed the crosshairs hovering over her district until after the tragedy last Saturday. 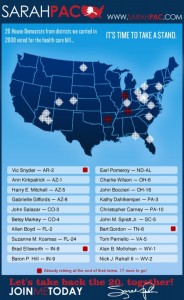 Now Palin, Inc. is making the ludicrous claim that their map didn't depict crosshairs, but surveyor's marks. This begs the question, what were they surveying for? Mineral rights in Democratic districts? Only the most chromosomally-challenged Teabagger would believe that dreck.

But I digress. Back to Big Sister's eight-minute-hate.

Today Sister Sarah hovered above the mortal world like an ethereal, paranoid angel, certain that evil forces are out to get her, determined to save humanity from those who dare point out her hypocrisy when discussing a human tragedy that ultimately, really, must be about her. Everything is.

Invoking extreme Old Testament religious imagery in her egoistic screed today, Sarah also accused her critics of creating a "blood libel" against her by pointing out the violent rhetoric on her website, her Facebook ramblings and endless inane Tweets. Blood libel, for those of you who don't speak "crazy," is a Christian invention, an ancient false accusation against the Jews that claimed they performed secret rituals during which they murdered Christian children. According to St. Sarah, she is as persecuted as these Biblical Jews. Because it's all about her, really. Always and forever, amen.

Such a saintly martyr she is! We should have a feast in honor of her many humble sacrifices (anoint the Holy Turkey Grinder in preparation . . .)

Her self-serving eight-minute video devoted a few sentences to the true victims of the massacre, but the remaining 99% clearly focused on her "defense" against the sinister liberal demons who constantly plot against her, and to serve her own political agenda by righteously affirming full victim status. According to Sarah, we should feel more sympathy for her than for Rep. Giffords, or little nine-year-old Christine Green, or the any of the six dead and 20 wounded in the tragedy. Not since the Jews of Biblical times has a figure been as victimized as our Sarah, the only truly injured party in this sad turn of events.

Because it's all about her. Really, it is.

Mike Malloy is a former writer and producer for CNN (1984-87) and CNN-International (2000). His professional experience includes newspaper columnist and editor, writer, rock concert producer and actor. He is the only radio talk show host in America to have received the A.I.R (Achievement in Radio) Award in both (more...)
Related Topic(s): Health- Mental-Sociopath-Narcissism; Mother Teresa; Sarah Palin; Tragedy, Add Tags
Add to My Group(s)
Go To Commenting
The views expressed herein are the sole responsibility of the author and do not necessarily reflect those of this website or its editors.