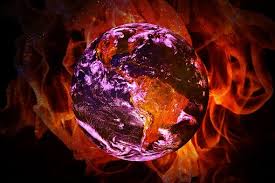 In case you haven't noticed, the weather has been--shall we say--unusual.

We needn't look any further than what occurred last week in the Midwest, where it was colder than in Antarctica and on Mount Everest.

The average high temperature for International Falls, MN, in January is 15 degrees Fahrenheit.

This week, temperatures are predicted to spike 80 degrees.

In the midst of people literally freezing to death, Donald Trump did his best to inflame the situation by tweeting:

"In the beautiful Midwest, windchill temperatures are reaching minus 60 degrees, the coldest ever recorded. In coming days, expected to get even colder. People can't last outside even for minutes. What the hell is going on with Global Waming [sic]? Please come back fast, we need you!"

What the hell is going on with global "waming?"

What the president doesn't care to know (despite having access to every top climate scientist in the world) is that all these dangerous meteorological aberrations are because of global warming, aka climate change.

The world is warming faster than scientists predicted; as a result, it's throwing normal weather patterns into flux.

According to the National Oceanic and Atmospheric Administration (NOAA), 2018 was the fourth warmest year for the planet.

This doesn't mean, despite what our president says, everywhere is going to be stifling hot all the time.

According to a study released in Geophysical Research Letters, a publication of the American Geophysical Union, the shifting jet stream is responsible for dramatic temperature swings, causing glaciers in western North America to melt four times faster than in the last decade, creating what we now know as a "polar vortex"--a term familiar today but virtually unknown to most only a few years ago.

The polar vortex is a frigid air mass concentrated in the Arctic that traps cold air.

Related Topic(s): Climate; Climate Change; IPCC; Mother Earth, Add Tags
Add to My Group(s)
Go To Commenting
The views expressed herein are the sole responsibility of the author and do not necessarily reflect those of this website or its editors.