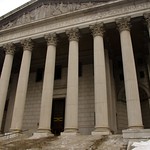 Further to my Quicklink on this morning's SCOTUS decision re Husted v A. Philip Randolph Institute, which keeps in place SoS Husted's state-level prerogative to erase voters' names from the rolls if they've skipped three federal elections in a row.

The originator of the suit, Larry Harmon, a software engineer and Navy veteran, skipped three federal elections between 2010 and 2014 but wanted to vote in favor of legalizing marijuana in 2015. But he had been removed from the voter lists for his trio of absences. He had been turned off by the presidential choices in election 2012 and so stayed home from the polls.

Is this an argument for an option suggested before: to include "none of the above" on ballots offering candidate choices? A complex issue I can't solve in a few sentences.

A further origin of this case was the Trump takeover of the DoJ in 2016. Prior to that, the DoJ had opposed Husted's purges. Now it supports them. In addition, since 2016 Trump has had the opportunity to appoint one SCOTUS Justice to carry on Justice Scalia's originalist policies.

Of, for, and by which people do the various governments proclaim themselves? Today's ruling will add to the hundreds of thousands of Ohioans already eliminated from voting by this law, the marginalized percentages: those of color, poverty, college/university students, senior citizenry, along with military veterans and people with disabilities, targeting the majority and begging for proliferation throughout the country. Today's decision took us one step closer to that vision.

A thin, nondescript postcard sent to a mailing address they may have left to join the military or due to foreclosure, informs Ohioans that they're targeted for removal from the voter lists if they skip two more federal elections. This sort of postcard is easily lost among junk mail or thrown away unnoticed. Why spend more taxpayer dollars?

A patch of blue shone down on us next-door to the Buckeye State. In Indiana, another voter purge law has received a preliminary injunction in voters' favor. The infamous Kobach Interstate Crosscheck program may not be leveled against underprivileged voters unfortunate enough to have common names--often marginalized for other discriminatory motivations.

There is an abundance of further information. I was lucky enough to catch a conference call among leading activists today from DEMOS, the ACLU, and other organizations They said that the SCOTUS decision was already in Congress for consideration. They did not contradict me when I suggested that if Congress becomes blue enough in November it may act against this ruling.

They said that Husted's purging is an option permitted by Ohio state law and that different states have different relevant laws in place. Moreover, the "5" dismissed the dissent by the "4" as only discussions. The NVRA doesn't expressly forbid Husted's particular brand of disenfranchisement.

According to Reuters by way of a DLCC Voting Rights Alert: "[In Ohio,] [v]oters have been struck from the rolls in Democratic-leaning neighborhoods at roughly twice the rate as in Republican neighborhoods,"

But will this morning's decision go viral across the country?

There are many ways to fight it--at the state level most effectively. Use social media to the fullest. Pummel your legislators at both levels against it. Advocate. Organize. Emphasize positive steps that have worked in favor of voters. Urge your state government to adhere to the NVRA, which allows nonvoting.

Clearly my emotions are ragged. I am attaching several links that will further inform you about this morning's contagious tragedy. And remember, another relevant decision will be announced this month: Maryland's gerrymandering case, Whitford v Gill. Perhaps, politically motivated and because the culprits are Democrats, SCOTUS will rule against the Old Line State. Here the focus is one oversized district chock full of a bright blue population.

Another case to be taken up next season concerns gerrymandering in North Carolina. SCOTUS had considered bundling all of these voting-related cases together to be ruled on later, but the November federal election comes first, so why not paint Ohio even redder, the decider state?

Here are some superb links and an open file (I couldn't include it as a link) sent out this morning by Allyn Brooks-LaSure, Vice President for Communications, The Leadership Conference on Civil and Human Rights (hat tip, Caitlyn Cobb):