Click Here to Remove All Ads
Cross-posted from Caixin Online

Following the same playbook as the Clinton Administration with spending cuts -- and ignoring the need for stimulus measures -- is only going to hurt the U.S. economy 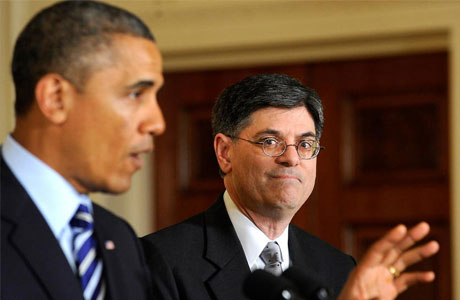 
Last week U.S. President Obama announced his intention to replace retiring Treasury Secretary Timothy Geithner with Jack Lew, who currently serves as his chief of staff. This pick indicates that there will be little change in President Obama's economic agenda in his second term.

The first-term agenda was focused on stabilizing the economy and restoring the financial system. Geithner took the latter task to mean preserving the existing structure under which a small number of large banks dominate the nation's financial industry.

This effort required massive government intervention in the industry in the form of the US$ 700 billion lent from the U.S. Treasury through the Troubled Assets Relief Program (TARP), trillions lent from the Federal Reserve Board through various special lending facilities, and trillions of dollars of guarantees provided by the Fed and the Federal Deposit Insurance Corporation. In addition, it was deemed necessary to establish special lending facilities to sustain two of the four biggest banks, Citigroup and Bank of America.

This effort succeeded, with the big banks having largely returned to their pre-recession levels of profitability. While there was considerable public favor for breaking up the large banks in the wake of the financial crisis, the big banks are now larger than ever as a result of several major mergers in the middle of the crisis.

This development is especially striking since the concentration in the U.S. financial industry is a very recent phenomenon. Prior to the 1980s, interstate banking was extremely limited, which prevented any one bank from gaining dominance in the national market. The crisis might have led to regulations that would make the financial industry look more like it did three decades ago.

However, the Obama administration kept Congress on a short leash when it was producing a financial reform bill. As a result, the system is little changed.

There is no reason to believe that Lew would take any different approach going forward. Lew had served in high level positions in the Clinton administration, most importantly serving as the director of the Office of Management and Budget (OMB) during the last two years of the administration.

After leaving the Clinton administration, Lew served a stint as a top executive in Citigroup, leaving just as the financial crisis was peaking in order to enter the Obama administration. He collected several million dollars for his work. Lew is not someone who is likely to be hostile to the Wall Street banks.

While the Obama administration supported a substantial stimulus in its first month in office, since that time it has maintained a focus on deficit reduction. This focus is occurring despite the fact that the U.S. economy is still operating at a level of output that is close to US$1 trillion below potential GDP. There also is little basis for concern about the United States' ability to borrow in financial markets. While interest rates have risen somewhat in recent weeks, the rate on long-term U.S. Treasury bonds is still well below 2.0 percent, which is near a low for the post-World War II era. The burden of interest as a share of GDP is also near its post-war low.

These factors suggest that policy would be much better focused on stimulating the economy than reducing the deficit. However there is nothing in Lew's background that suggests he may try to push a turn in the direction of greater stimulus.

Lew's stint as director of the OMB coincided with the years in which the U.S. government was running large budget surpluses: the only surpluses of the last half century. While the reality is that these surpluses were only made possible by a stock market bubble driven consumption and investment boom, it is Democratic Party folklore that the surpluses and strong growth at the end of the 1990s were the result of President Clinton's economic policy.

In the Democratic Party folklore, the basis for the good news at the end of the decade was the tough decisions that President Clinton made when he first took office. In 1996, President Clinton pushed through a package of tax increases and spending cuts. The folklore holds that this deficit reduction was the basis of everything good that followed.

It is easy to show that the stock bubble, with price to earnings ratios rising to more than double their historic levels, was actually the basis for the end of decade prosperity. The bubble was of course unsustainable and when it burst we got the recession in 2001. That recession, while officially short and mild, led to the longest period without job growth since the Great Depression.

But that is not the message that the Democrats or Jack Lew take from the history of the nineties. For them, it is a story where everything good comes from deficit reduction. This means that we can expect that Lew will continue the current obsession with the deficit and ignore the economy's weakness. That is likely to mean four more years of subpar growth.

Dr. Dean Baker is a macroeconomist and Co-Director of the Center for Economic and Policy Research in Washington, D.C. He previously worked as a senior economist at the Economic Policy Institute and an assistant professor at Bucknell University. (more...)
Related Topic(s): Banks; Jack Lew; Treasury Federal Reserve Monetary Policy; Treasury Secretary Tim Geithner, Add Tags
Add to My Group(s)
Go To Commenting
The views expressed herein are the sole responsibility of the author and do not necessarily reflect those of this website or its editors.