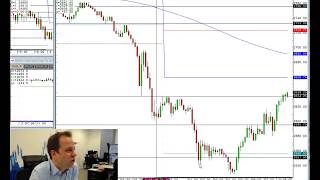 Before anyone starts jumping off buildings, let me give you a few items to think about.

1) The stock market is not the economy. It moves in mysterious ways that often have little or nothing to do with the economy. In October of 1987, it plunged more than 20 percent in a single day. GDP grew 4.2 percent in 1988 and 3.7 percent in 1989. The market did recover much of its value over this period, but we don't know whether or not it will recover the ground lost in the last week either.

2) The market has gone through an enormous run-up over the last nine years. The current level is more than 230 percent above its 2009 lows. That translates into an average nominal return of more than 14.0 percent annually, before taking into account dividends.

The gains have been even more rapid over the last two years. Even with the recent drop, the market is more than 40 percent above its February 2016 level. Most people would have considered it crazy to predict the market would rise by 40 percent over the next two years back in February 2016. In other words, people who have invested heavily in the stock market have nothing to complain about. If they didn't understand that it doesn't always go up then they should keep their money in a savings account or certificates of deposit.

3) This plunge is not in any obvious way linked to higher interest rates. We can say that because interest rates have not risen that much. The yield on 10-year Treasury bonds stands at 2.71 percent. (It fell sharply today as the market was plunging.) That compares to about 2.4 percent a year ago. It's pretty hard to tell a story that a 0.3 percentage point rise in long-term interest rates will sink the stock market and the economy. The yield had been less than 1.8 percent two years ago.

4) The plunge in markets is worldwide with markets in Europe and Asia also sinking sharply. This undercuts the blame Trump story unless the theory is that Trump is so bad he is going to sink the whole world economy. Also, the markets are still above the levels they were at when Trump took office, so this is really not a good theory for Trump critics to embrace.

In short, calm down. The economy is not going to collapse. If you have less money in your 401(k) than you did last week, just remember: you have far more than you expected to have last year.

Dr. Dean Baker is a macroeconomist and Co-Director of the Center for Economic and Policy Research in Washington, D.C. He previously worked as a senior economist at the Economic Policy Institute and an assistant professor at Bucknell University. (more...)
Related Topic(s): Economy; Markets; Savings; Stock Market- Investing, Add Tags
Add to My Group(s)
Go To Commenting
The views expressed herein are the sole responsibility of the author and do not necessarily reflect those of this website or its editors.