Will We Be Seeing More of These Soon?
(Image by Izmam Khan)   Details   DMCA

Well before the pandemic-crisis struck, analysts were sounding warnings that corporate debt had reached such dangerously high levels that a normal downturn in the business cycle would see many corporate bankruptcies. But the analysts did not count on the rescue by the COVID-19 stimulus package. Now, just as in 2008, the wealthy are going to cream off most of the stimulus package while only a little will trickle down to the workers. The present stimulus funds will be used to pay down that massive but avoidable corporate debt.

Why avoidable? It is the result of predatory practices. I explained how corporations changed their sensible business practice from saving 50% of dividends for corporate use including economic downturns and paying out only the other half in dividends, to stripping out every cent of profit by dividends, in the first article in the series. An even more extractive, predatory practice hides under the term 'the leveraged buyout'. Equity and hedge funds scour the country to find corporations, large or small, that have net assets and a good cash flow. Then they buy those companies primarily with their own assets. Here's how it's done:

Equity fund Pain Capital discovers Victim Co. that operates a chain of profitable supermarkets and owns the locations free and clear of mortgages. Pain needs $100 million to buy enough shares to control Victim Co. Pain is willing to put up 10 million and convinces a lender to advance 90 million by committing to have the corporation pledge its supermarket buildings as security for the debt and assume the payments. As soon Pain has control, it votes in its choices for the Board of Directors, who quickly implement the plan. If a public company, Pain may take the company private. From then on, Victim Co. is saddled with this massive debt for no proper corporate reason. Now, the stimulus money will go to pay off this type of corporate debt first; some of what's left may go to the employees.

Eric Reed's no bleeding-heart lefty. He writes on a very conservative, Trump friendly, Wall Street website, TheStreet. Reed worries, in enlightened capitalist self-interest, that this leveraged-buyout tactic has gone too far. He notes that many such targeted businesses, once very profitable, go bankrupt. According to him, leveraged buyouts have imposed debt payments up to seven times their gross earnings (EBITA) on the acquired companies.

How big a deal is it? As Reuters has reported, "the volume of leveraged loans reached $1.3 trillion in the U.S. and Europe in 2018, versus $734 billion in 2007". For those of us used to thinking in hundreds, and occasionally in thousands, those numbers are so high they may be incomprehensible. But we can assume that a lot of stimulus money will be sucked up to meet those installment payments. 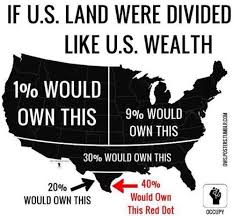 Why aren't the equity and hedge funds worried about losing their investment through bankruptcy? They know how to make money on a bankruptcy too--especially by underfunding worker pensions (of course, executive pensions are always fully funded). They also know how to cherry pick, with insider information, the best assets and purchase them at fire-sale prices in the bankruptcy. For anyone who thinks it couldn't be worse than what they have read so far, you can read here about these and other moves in the equity and hedge-fund predatory playbook using the recent Sears bankruptcy as an example.

As part of the COVID-19 stimulus package, that safety measure has been further extended to help corporations. In recognition of the potentially disastrous effect on the economy by the towering corporate debt, a huge chunk of the stimulus will go to the Fed so it can purchase the precarious corporate bonds, including high-yield bonds (otherwise more accurately described as junk bonds--they are high yield because they are high risk) from the lenders. Does anyone see another upward transfer of wealth by socialistic measures here? Government deficit - Federal Reserve Bank - High-end lenders - Future government debt paid by taxpayers. No consideration has been given to the fact that the wealthy equity and hedge funds, who got dividends that left the companies vulnerable, should have to pay back some of what they took. The mere thought would horrify any well-conditioned mind.

Related Topic(s): Corporations; Economics; Laws; Politics, Add Tags
Add to My Group(s)
Go To Commenting
The views expressed herein are the sole responsibility of the author and do not necessarily reflect those of this website or its editors.

STAY IN THE KNOW
If you've enjoyed this, sign up for our daily or weekly newsletter to get lots of great progressive content.
Series: "Covid Crisis"