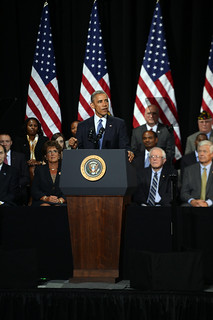 President Barack Obama at the rostrum

What can one say; after stating repeatedly, "No ground forces will be sent" to Iraq and only days after that "unequivocal" statement, President Obama is said to be considering a "rescue" operation using American military forces but only for humanitarian purposes mind you and not use these troops to battle ISIS, the Islamic State in Iraq and Syria that he's currently bombing.

Further "clarifying" the situation Rhodes acknowledged troops would face dangers but like American forces anywhere would defend themselves if they came under attack.

The decision on how to carry out the rescue operation won't come until an "assessment" team of 130 personnel reports back within a few days.

At this point something needs to said about this possible "rescue" mission; it's almost certain to happen considering its presented as "how to" mount the operation as opposed to whether or not they'll carry it out. So consider it a done deal.

Then consider this; some American troops will undoubtedly be killed, some will be wounded, probably severely and some may be captured.

And once this occurs the cacophony from the neo-con right wing war mongers will be so shrill and unrelenting they'll demand we expand this "humanitarian" operation into full scale war with ISIS.

Already the two war mongers from the neo-con firm of McCain and Graham, none other than Senator's John McCain and Lindsey Graham have already been on the airwaves blasting Obama's initial bombing campaign mission against ISIS as insufficient because the group poses an imminent threat to the US. What "imminent" threat you may ask? Don't ask. As for evidence, of course there is none. It's all a charade dressed up as a bogey man meant to scare the American people. But these two blowhards will be the loudest calling for an expanded military operation of US forces in Iraq.

Getting back to Obama's "no ground forces will to be sent" to Iraq and ground forces will be sent but only for a humanitarian purposes comments which best describes government double talk, or better Orwellian "new speak", these "things" have a way of escalating. And of course the specter of Viet Nam hangs ever present, still haunting the crazies on the far right who refuse to acknowledge we lost that war.

Now with over 4800 American dead in the Iraq war from 2003 until they were withdrawn in 2011 the war mongers seeing Fallujah fall and just recently Mosul to ISIS they'll say "they died for nothing"-which of course they did, used as fodder by the Bush/Cheney gang based on their lies and fabrications of WMD-and want to "go back in there and finish the job"-something they couldn't pull off in Viet Nam.

So one can "believe" if they will, this latest air incursion in Iraq by the US military is some short term humanitarian mission to save the Yazidi's from the ruthless, merciless Sunni Islamic jihadists of ISIS; and of course there's sympathy and compassion for the plight of the innocent Yaziti's caught in the maelstrom.

But any international humanitarian effort is the job for the U.N. and an international peace keeping force, not the US and its military. As we have witnessed since the invasion of Iraq in 2003, any US presence can only be the catalyst for a worsening situation for all the people of Iraq, Sunni and Shiite alike.

Here is a little nugget I've come to know, ISIS is a wholly owned creation of the US military, secretly trained and armed in Jordan to take on the American backed effort to fight against and overthrow Syrian President Bashar Assad. That's not going to happen.

Retired. The author of "DECEIT AND EXCESS IN AMERICA, HOW THE MONEYED INTERESTS HAVE STOLEN AMERICA AND HOW WE CAN GET IT BACK", Authorhouse, 2009
Related Topic(s): Hypocrisy; Newspeak; Obama; Orwellian, Add Tags
Add to My Group(s)
Go To Commenting
The views expressed herein are the sole responsibility of the author and do not necessarily reflect those of this website or its editors.