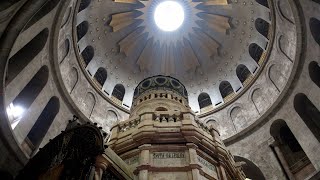 It was a protest long overdue -- and one that produced rapid results.

For the first time in living memory on Sunday, Jerusalem's Church of the Holy Sepulchre slammed shut its doors to worshippers and tourists. In justifying the closure of the site where it is believed Jesus was crucified, buried and resurrected, Church leaders accused Israel of launching a "systematic and unprecedented attack against Christians in the Holy Land."

On Wednesday, the church reopened after Israel, bombarded with bad publicity, appeared to climb down.

Shuttering the church had threatened economic damage too. More than a quarter of Israel's nearly 4 million visitors each year are Christian pilgrims. They and many other tourists come primarily to follow in the footsteps of Jesus -- and the Holy Sepulchre is top of their sightseeing list.

The churches are right that the survival of a meaningful Palestinian Christian presence in the Holy Land hangs in the balance. Christians now comprise just 10 percent of the large Palestinian minority in Israel -- or about 2 percent of Israel's total population.

In the Palestinian territories, which are under belligerent Israeli occupation, Christian numbers have similarly plummeted.

But however serious the problem, the joint statement from Roman Catholic, Greek Orthodox and Armenian Apostolic leaders was only tangentially concerned with the fate of this local community of believers. The protest was really about protecting the churches' profits from real-estate and investment deals.

The Christians of the Holy Land are overwhelmingly Palestinian, while the churches speaking on their behalf are overwhelmingly foreign. The Greek Orthodox Patriarchate and the Vatican are vast enterprises that are as concerned with their commercial viability and influence on the global stage as they are about the spiritual needs of any specific flock.

And nowhere is that fact more obvious and telling than in the cradle of the Christian faith -- today split between Israel and the fragments of an embryonic Palestinian state.

The churches have long had to navigate a complex political game in the Middle East with Israel, the region's key power-broker, and with Israel's patron in Washington.

That task has grown more daunting in recent years, as Christian evangelical influence has come to dominate politics in the United States. Most US evangelicals are far more interested in "end-time" prophecies that require unthinking support for Israel and illegal Jewish settlements than they are in preserving a 2,000-year-old local Christian tradition.

The rising power of the evangelicals was exemplified in Donald Trump's presidential election victory in late 2016, and his recent decision to move the US embassy to Jerusalem, terminating already frail hopes of a two-state solution.

These trends are simply accelerating a long-standing process in which Palestinian Christians, whether in Israel or under occupation, are fleeing the Holy Land.

Related Topic(s): Christianity; Evangelical; Investors; Jerusalem; Money And Power; Muslims; Palestinian; Protesting Israel, Add Tags
Add to My Group(s)
Go To Commenting
The views expressed herein are the sole responsibility of the author and do not necessarily reflect those of this website or its editors.