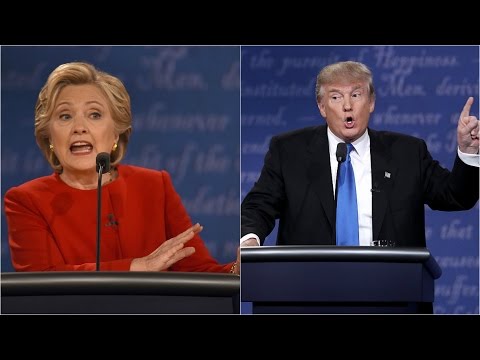 When you think about it, the whole campaign and debate system is rather embarrassing, isn't it? The process invites grown adults to stand before 100 million people to brag about themselves, quarrel like children, and tell obvious lies while ignoring the nation's real problems. Meanwhile, those willing to address those concerns are excluded from the debate stage with their solutions unheard.

Is this really the best we can do?

For instance, in Monday's exchange between Hillary Clinton and Donald Trump, we had two rather out-of-touch, super-rich white people spending ninety minutes talking over each other and telling us how exemplary they are not only personally, but especially at solving the problems of impoverished non-whites. For this we should vote for one rather than the other.

Their other reasons? The proposed policies of each are a bit less racist than their opponent's. Each claims to be better at killing destitute people in the Middle East and Africa. And, by the way, they're superior at making their sponsors even richer, so that a more or less tiny portion of Wall Street's wealth might trickle down to the rest of us -- some day.

Take Mr. Trump (Please!). He brags about how "amazing" he is. He's a billionaire, he claims. That (and nothing else) makes him . . . "amazing." And this, even though his wealth was accumulated by frequent business interactions with mafia dons, by discriminating against people of color, stiffing contractors and workers, off-shoring American jobs, avoiding payment of taxes, and by regularly declaring bankruptcy.

Mr. Trump belittles women, African Americans, immigrants, Mexicans, and Muslims. He promises to break constitutional and international law by torturing terrorist suspects, by killing their families, expanding Guantanamo, excluding war refugees created by U.S. foreign policy, and by racial and religious profiling involving unconstitutional "Stop and Frisk" policing and intense surveillance of Muslim neighborhoods. He also pledges to build a wall along a border that separates a country whose land was stolen from Mexico in 1848. Moreover, he says he'll continue trickle down economic policies of tax reductions for the rich that despite the historical record, will produce results that will be (you guessed it) "amazing."

On the other hand, we have in Hillary Clinton a woman who reached Monday's podium by highly questionable means centralizing fraud, disenfranchisement of independent voters, incomplete vote counts, and violation of rules governing the Democratic National Committee. (We're supposed to forget all of that.)

Moreover, she thinks her husband did a "pretty good job" as president when he betrayed his working class base by ramming through the North American Free Trade Agreement (NAFTA), the worst trade deal in American history. (Mr. Trump is right about that.) With his wife's approval, that president oversaw passage of an Omnibus Crime Bill which Ms. Clinton saw as a necessary measure against black "Super Predators" who (like dogs) must be "brought to heel." In reality however, the Crime Bill proved responsible for the imprisonment of record numbers of African Americans and Hispanics mostly guilty of victimless crimes. The Clintons also ended "welfare as we know it." In the process, their "reforms" further impoverished the poor now desperate for non-existent work in the jobless economy exacerbated by NAFTA.

As the senator from New York, Mrs. Clinton voted for the Iraq War that directly resulted in the deaths of more than one million people. As Secretary of State, she pushed for regime change in Libya and created a failed state where relative prosperity had existed before. Same in Syria. She unconditionally supports Israel in its illegal occupation of Palestinian territory and approves record-level arms sales to Saudi Arabia -- the Butcher of Yemen (the poorest country in the Middle East) and the hidden hand behind ISIS itself. Clinton favors a no-fly zone in Syria and is evidently willing to risk the nuclear war with Russia that well might result.

In short, under a Clinton presidency, the U.S. will continue to modernize its nuclear weapons of mass destruction, and to implement a foreign policy based on imperialism, full spectrum military dominance, and permanent war.

That's business as usual. And that's why Mrs. Clinton might lose this election. At least crazy Donald represents change for people whose daily experience tells them that business as usual isn't working for them.

Are Trump and Clinton the best we can do? God help us!

In the meantime, the voices of Bernie Sanders and Jill Stein are quite forgotten and inaudible. If you recall, their campaigns are not based on braggadocios trumpeting of their "amazing" accomplishments. Instead, they propose actual policy changes aimed at directly improving the lives of working people like you and me. They actually talk about:

So, what to do in this embarrassing situation? Here's what I think. Unfortunately, we must recognize that:

Related Topic(s): Debate; Fraud; Fraudulent Elections; Imperialism; Lies; Presidency; Truth, Add Tags
Add to My Group(s)
Go To Commenting
The views expressed herein are the sole responsibility of the author and do not necessarily reflect those of this website or its editors.