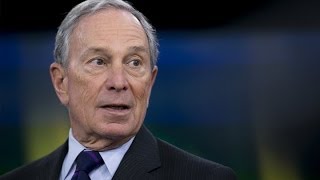 I reckon Mike Bloomberg took a good long gander at that GOP "Massive Tax Cut for the Super-Rich Disguised as Healthcare" bill and liked what he saw. (Salon: Michael Bloomberg says Democrats should "get behind" President Trump) Pivoting on a dime -- or rather, on a gargantuan pile of extra loot for himself -- he dropped his opposition to the "dangerous demagogue" Trump and called on Democrats to stop opposing him too.

One should recall, as the story notes, that Bloomberg owns "several media outlets." So it's a safe bet that this "get with the program and get behind the president" line will soon be trickling down throughout his various media ventures.

I've said from day one -- even before Trump began stocking his cabinet with Goldman-Sachs alumni -- that the Establishment would line up behind him because he was going to give them everything they'd ever wanted, turning the country into one big neo-feudal cash cow for oligarchs and corporations. Wall Street loves him. The war profiteers and Pentagon berserkers love him, because he's drowning them in money and letting them do what they want (the same goes for the so-called "Deep State" security agencies, who are now more funding and more free from control than ever).

The Congressional extremists love him because he will sign whatever nation-destroying, citizen-killing bullshit they pass. Even the mainstream media love him, deep down, because his antics have given them their highest ratings and profit margins in years. The idea that he is some kind of "anti-Establishment" figure is just ludicrous, as is the idea that the "Establishment" is going to bring him down.

He cannot be removed from office unless the Congressional extremists decide to impeach him, and they are not going to do that. It's just not going to happen. They don't want to do it, and anyway, their corporate overlords and paymasters wouldn't stand for it.

Yes, Mike Pence would faithfully serve the same agenda, but the gigantic disruption of impeaching a president would throw the whole political world into turmoil -- and uncertainty. It would be like Brexit on steroids, upending the political landscape and setting deep currents moving whose direction no one could predict. Following the earthquake of Brexit, the new shock to the system that Theresa May wrought with an unnecessary election has revived a genuine leftist alternative in Britain and sent the power structure into a dithering panic. The avowed and unrepentant socialist Jeremy Corbyn is now, astonishingly, beating May in new polls on who would be the best prime minister for the country. Bloomberg and his fellow billionaires and oligarchs certainly don't want to see anything like that happening in the US.

So it's time to line up behind the Donald and "make sure his presidency succeeds" -- succeeds in its mission to destroy the last few restraints on corporate, oligarchic and authoritarian state power. The Deathcare Bill is a big first step in that direction -- and "moderate" Mike Bloomberg is now on board. Look for other "moderates" and "centrists" to follow.

Related Topic(s): Michael Bloomberg; Money Buys Power; Trump Presidency, Add Tags
Add to My Group(s)
Go To Commenting
The views expressed herein are the sole responsibility of the author and do not necessarily reflect those of this website or its editors.