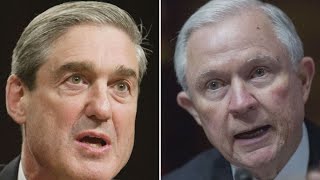 Well, I had a completely different blog planned and then ... BOOM!

The NY Times reports that both Sessions and Comey have been interviewed by Mueller. Oh, and current FBI director Christopher Wray threatened to resign if Jeff Sessions didn't back off him about firing perfectly innocent public servants. Yup, the latest news is that Trump was attempting to purge the FBI to obstruct the Russia investigation.

The way the Republicans, under this monster's direction, have attempted to ruin the lives, careers, and reputations of innocent government employees, people who devoted and often risked their lives to serve and protect American citizens, strictly to protect this orange con man, is beyond deplorable.

And this must just give Putin the biggest woody he's had in years. He gets to watch one US political party completely malign and defame and attempt to destroy our own national institutions of criminal justice. This turned out waaaaaaay better than he could've ever dreamed. And the Republicans now find themselves on the side of the Ruskies. Whodathunk it?

Putin played Trump for the little naked emperor he is. Let Trump think he can play God with anybody in Washington DC and watch the carnage enfold. And Trump is the perfect patsy for the role, as he actually believes that he is King of America and everyone works for him. Owes their lives to him. Should kneel before him and kiss his ring and swear fealty to him. If they dare betray him, well...

That's not a bit psychopathic, is it? Perfect puppet material, how convenient. No wonder they invested so heavily on this useful idiot.

Mueller's investigation is now moving like greased lightening. Maybe he can wrap this up in time to salvage a few of our international relationships and US confidence in our own system of government.

Kathy never expected a career in radio as a talk show producer. Born and raised in Atlanta, Georgia, Kathy was completing her nursing degree when in 2001 - in an emergency - she was asked to fill in as the producer of Mike's program. Within a few (more...)
Related Topic(s): Donald Trump; Jeff Sessions; Mueller Investigation, Add Tags
Add to My Group(s)
Go To Commenting
The views expressed herein are the sole responsibility of the author and do not necessarily reflect those of this website or its editors.