The majority leader cares only for winning, not rules or democracy itself. He is doing more damage than Trump 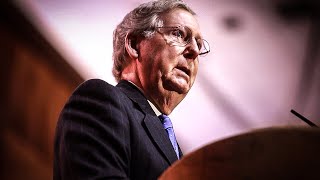 Mitch McConnell Destroys The Senate So Trump Can Destroy The Judiciary
(Image by YouTube, Channel: The Ring of Fire)   Details   DMCA

No person has done more in living memory to undermine the functioning of the US government than the Senate majority leader, Mitch McConnell.

Yes, Donald Trump has debased and defiled the presidency. He has launched blistering attacks on Democrats, on judges he disagrees with, journalists who criticize him and the intelligence community.

But McConnell is actively and willfully destroying the Senate.

Last Wednesday he used his Republican majority to cut the time for debating Trump's court appointees from 30 hours to two, thereby enabling Republicans to ram through even more Trump judges.

McConnell doesn't give a fig about the Senate, or about democracy. He cares only about winning. On the eve of the 2010 midterm elections he famously declared that his top priority was for Barack Obama "to be a one-term president."

Related Topic(s): Democracy; Government Accountability; McConnell-Mitch; Senate; Senate Crime, Add Tags
Add to My Group(s)
Go To Commenting
The views expressed herein are the sole responsibility of the author and do not necessarily reflect those of this website or its editors.