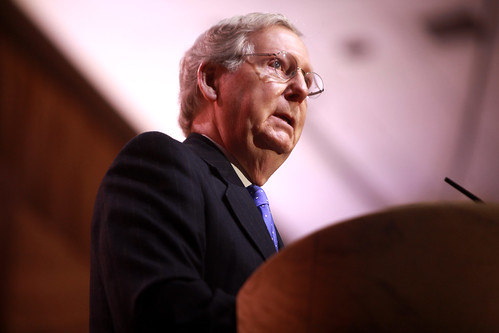 Over 50 years ago, Mitch McConnell was the subject of a cover-up at the age of twenty-five. He earned a B.A. in political science in 1964 and worked as an intern for Senator John Sherman Cooper. McConnell was called up by the draft in 1967 and was lucky to get into the Army Reserve (which were not then serving overseas). He lasted 37 days in the Army, court-martialed for sodomy.

Sodomy is not actually mentioned in the Judeo-Xian Bible as some terrible sin, that book just reviles Sodomites (people from Sodom) in many ways. But in the time and location of Kentucky in 1967, sodomy meant any sexual act other than the missionary position between a married male-female couple.

Mitch got caught having sex in the barracks on an Army base during training and a quick court martial sentenced him to a dishonorable discharge. Details are not known. Sen. Cooper intervened with the camp commander (copies of the telegram exist) asking for a medical discharge, which shows on record as 'optic neuritis'; that diagnosis was supposed to preclude military service, but no other cases of such a discharge have been found. No record of a physical exam has been found; treatment with steroids was then available, but no record of such treatment has been found. The telegram stated that McConnell wanted to attend N.Y.U., but it never happened.

A FOIA request to the Selective Service in late 2007 was stonewalled; they produced a summary document with false information. Reference to a transcript of the court martial exists among McConnell's archives, but that reference has the strange notation 'not on file'.

Times have radically changed in the fifty-plus years since the court martial, and not many would fault McConnell for whatever sexual activity took place so many decades ago - well, maybe Kentucky hasn't gotten any wiser - but the real issue for most Americans is the cover-up, the privileged young man being excused by political heavyweights.

And here we are in 2020 with 'Moscow' Mitch McConnell involved in another cover-up, this time excusing a congenital liar and confessed extortionist and tax cheat and embezzler and sexual predator of abusing the power of his office for personal gain. And how many such cover-ups by and for McConnell will be found in those many years between, once the United States has a constitutional government again?

Related Topic(s): Cover-ups; Ditch Mitch Campaign For Kentucky 2020; Kentucky Politics; McConnell-Mitch; McConnell-Mitch; Sodomy, Add Tags
Add to My Group(s)
Go To Commenting
The views expressed herein are the sole responsibility of the author and do not necessarily reflect those of this website or its editors.

How To Survive The Coming Depression

The Evil of Dick Cheney