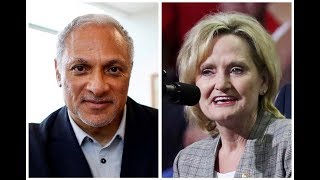 Although Election Day is past, a Senate contest in Mississippi remains to be decided.
(Image by YouTube, Channel: PBS NewsHour)   Details   DMCA

[Jackson, Mississippi] In the vote-stealing biz it's called "push polling" in which a fake pollster cons a voter out of their vote.

"There were evidently some calls made to Espy supporters. Most of them were older supporters. For example, I was told that one of them said that he was from a survey company. He asked her, 'Was she going to vote?' She said, 'Yes.' They asked her who she was going to vote for and she said, 'Mike Espy.' And she was proud to vote for Mike Espy. And then, allegedly, they told her she did not have to go on Tuesday, because her very acknowledgment over the telephone for me was actually a registered vote for me."

Espy said they would not have known about this game except, "She was smart enough to call our campaign." Espy's lawyers have obtained the victim's sworn affidavit.

Push-polling was infamously successful in elections in years past. For example, in 1996, supporters of Republican Sam Brownback, posing as pollsters, contacted Kansas voters to ask those expressing support for Democrat Jill Docking if they would change their vote if they knew that "Jill Docking is Jewish."

Docking, who is indeed Jewish, lost. Funds for the "push polls" were traced back to Koch Industries. (See The Best Democracy Money Can Buy: The Case of the Stolen Election.)

In a related matter, Palast Investigative Fund attorneys, led by Jeanne Mirer of Mirer Mazzocchi & Julien of New York, have notified the State of Mississippi that The Palast Fund will file suit under the National Voter Registration Act unless we receive complete information about mass purges in the state prior to the mid-term elections.

The journalists of the Palast Fund are committed to uncovering racially poisonous vote suppression tactics.

Vote suppression is not a game. It's a crime.

Stacey Abrams, who refused to officially concede defeat in her bid for Governor, will file suit today in federal court in Atlanta charging the entire election process was hopelessly tainted. Abrams, who has formed a non-partisan voter protection organization Fair Fight Georgia, will cite, among other racially biased attacks on the rights of citizens to vote, the wrongful mass purge of voters by Secretary of State Brian Kemp -- who was Abrams' opponent and the presumptive winner.

The Palast Fund will make available to the Court the list of 340,134 Georgia voters our experts have determined were, without question, wrongly purged from the voter rolls. This purge list, obtained by the Palast Fund through a law suit against Kemp, includes Christine Jordan, the 92-year-old cousin of Martin Luther King Jr.

Abrams' co-plaintiff is State Sen. Nikema Williams. Williams was arrested in the State Capitol, then strip-searched, for standing with constituents during a legally permitted protest of the blatantly bent election. [See our exclusive interview with Senator Williams for SalonTV.]

Greg Palast's investigative reports appear in Rolling Stone, the Guardian and on BBC Television. His latest film, The Best Democracy Money Can Buy, on how Donald Trump stole the 2016 election, is available on Amazon. Palast is Patron of the Trinity (more...)
Related Topic(s): Election; Mississippi; Purge; Supporters, Add Tags
Add to My Group(s)
Go To Commenting
The views expressed herein are the sole responsibility of the author and do not necessarily reflect those of this website or its editors.