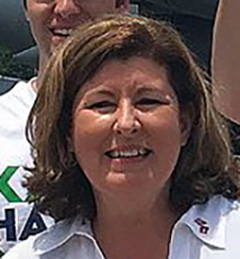 $50 million spent to send Karen Handel to Congress as Georgia's sixth district representative. What a waste of resources, on both sides. Think of the infrastructure repairs that could've been implemented with that money. Maybe fortify the Interstate bridges and overpasses so they didn't collapse if a vagrant set one on fire?

So what happened Tuesday? How did Jon Ossoff lose by five points with a $30 million bankroll in a district that Trump only won by 1%? Well, there are a couple of theories. One, Handel's handlers spent their $20 million more wisely, on super-negative campaign ads that showed Ossoff and Nancy Pelosi as two tax-and-spend liberal democrat-cum-ISIS supporters who would steal your guns and force you to marry a homosexual. Ossoff ads were beige-neutral to the point of monotony. His ads were dry as a cracker.

I get it. Democrats are nice and don't like to play dirty politics. But this is the way the game is played these days. Look at the p*ssy-grabber and his violent, hateful rhetoric...if the Neocons pair you with ISIS, then you gotta marry them to the Criminal in Chief.

Every Ossoff ad should've depicted Handel and Trump riding a limo together, building that wall side by side, facing federal grand jury indictments while holding hands, backing out of the Paris accords while eating ice cream. You get the idea. Can't bring a limp noodle to a gun fight during the nastiest political cycle in American history.

Then there's Ossoff himself. This guy makes Al Gore look like the late Robin Williams. If he had fire in his belly you'd never know it. Never held any political office, only 30 years old, didn't even live in the district at the moment. Smart kid, but way too green, and not in an environmental way.

If this race was so damn important and worthy of tens of millions of dollars, why didn't the DNC float another more qualified, animated candidate? Ossoff would've made a great candidate for Georgia's General Assembly, or mayor of Decatur or something to begin his political career. And he didn't have any real platform. Never mentioned challenging Trump -- never mentioned Trump at all. Nothing on climate change, nothing on health care -- just bland, milquetoast DNC talking points about doing nice things for Atlanta. Meh.

As long as the democrats keep running "Republican lite" candidates this will keep happening. I hope these five back-to-back losses serve as a lesson for the midterms.

Kathy never expected a career in radio as a talk show producer. Born and raised in Atlanta, Georgia, Kathy was completing her nursing degree when in 2001 - in an emergency - she was asked to fill in as the producer of Mike's program. Within a few (more...)
Related Topic(s): Democrats; Jon Ossoff; Losses, Add Tags
Add to My Group(s)
Go To Commenting
The views expressed herein are the sole responsibility of the author and do not necessarily reflect those of this website or its editors.