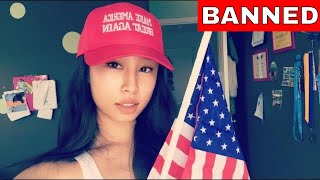 Kathy Zhu a pretty Asian Miss Michigan found out that she doesn't have free speech. The organization Miss World America took away her Miss Michigan title and banned Miss Zhu from further participation in their pageants. The reason? Someone complained that Miss Zhu's posted opinions on social media are "offensive, insensitive and inappropriate."

If Miss Zhu had donned a hijab, she would have risked being lumped in with congresswoman Ilhan Omar and said to be anti-American, not a helpful designation for a beauty queen. Have we already forgotten that, according to the official story, we were attacked on 9/11 by Islamic terrorists who destroyed three New York skyscrapers, part of the Pentagon and many US lives? Muslims are the reason we have TSA and searches of airline passengers. Why would Michigan's beauty queen want to associate herself with these memories?

If Miss Zhu had said that the police are the main killers of black Americans, it would have been a lie, but not distressing to victim groups. By telling the truth, Miss Zhu caused "distress" and, therefore, was guilty of a racist act. Miss World America officials decided that as Miss Zhu was Islamophobic and racist she was no longer "of good character" and, thus, her association with the Miss World America organization was terminated by Laurie DeJack, Michigan state director of the organization.

Perhaps Laurie isn't very bright and can't tell the difference between free speech, truth, and racism and also cannot see good sense in Miss Zhu's reluctance to associate herself with Muslims with whom the US is at war and has been at war since Miss Zhu was two years old. As my readers know, I think the "Muslim terrorist" threat in America is a hoax and a Ziocon orchestration to deceive Americans into fighting Israel's wars, but most Americans don't. The minute Miss Zhu donned a hijab and a photo was snapped, she would have been history.

There is an alternative explanation to Laurie DeJack's arbitrary action against Miss Zhu. Perhaps Miss World America is a white supremacist organization and has seized the opportunity to get back one of its titles from a racial minority. It seems to me that Miss Zhu has a racial discrimination suit.

Miss Zhu's pageant colleagues should rally around her and let Laurie DeJack know that if Miss Zhu goes, they go too. It will be interesting to see if women are as mutually supportive as feminists want them to be.

Related Topic(s): Banned; Kathy Zhu; Misconduct; Miss Michigan, Add Tags
Add to My Group(s)
Go To Commenting
The views expressed herein are the sole responsibility of the author and do not necessarily reflect those of this website or its editors.