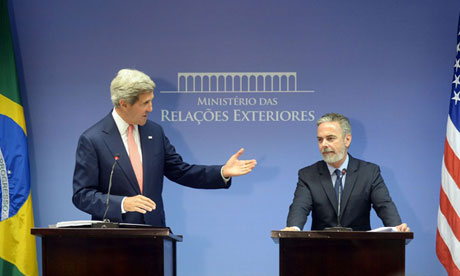 With a few exceptions, most of Europe hasn't had an independent foreign policy for the past 70 years, and the UK stands out as a prime example of this. I remember discussing British foreign policy with a UK member of Parliament a few years ago, and he said to me:

"Do you want to know what the Foreign Office is going to do? Just ask the [US] State Department."

The British government proved its first loyalty once again by detaining Glenn Greenwald's Brazilian partner, David Miranda, under the UK's Terrorism Act 2000 as he passed through London's Heathrow airport on Sunday. He was interrogated for the maximum of nine hours, and his laptop, cell phone, and other stores of digital information were seized.

It is clear that Miranda was not suspected of any connection to terrorism. To detain and rob Miranda on this pretext is no more legal than to have done so on trumped-up allegations that he was transporting cocaine. The White House has admitted that Washington had advance knowledge of the crime, and so we can infer approval -- if not active collaboration.

It is interesting, too, because the UK government had previously kept a relatively low public profile on the Snowden case, despite the fact that Snowden had leaked files from its own intelligence-gathering and not just the NSA's. Until Sunday, it looked as though the British authorities had learned at least a little bit about public relations after their international embarrassment last year, when they threatened to invade Ecuador's embassy in order to capture Julian Assange. Nevertheless, they are still keeping Assange trapped in the Ecuadorean embassy, illegally, and presumably at the behest of you-know-who.

Now, the editor of the Guardian, Alan Rusbridger, has revealed that the UK government, at the highest levels, has been very seriously threatening and harassing his newspaper in an attempt to silence its reporting.

At the other end of the spectrum of national sovereignty are the independent nations of Latin America, three of whom have officially offered Snowden asylum, and others who would never turn him over to the United States if he were to land on their territory (or seek asylum in their embassies). These governments have played a significant role in the Snowden affair and NSA spying scandal because they have achieved a "second independence" over the past 15 years -- one that enables them to pursue an autonomous foreign policy.

The exercise of this new independence is largely ignored or, more often, denigrated in the major media as populist demagoguery. But it is easy to see that the problem, as the Washington would see it, is much deeper than that.

The foreign minister for Brazil, Antonio Patriota, demanded answers from British Foreign Secretary William Hague over the detention of David Miranda. Last week, at a news conference with US Secretary of State John Kerry in Brazil, Patriota spoke of a "shadow of distrust" caused by Snowden's revelations and Greenwald's reporting that Brazilian citizens were a major target of NSA surveillance.

Patriota was previously Brazil's ambassador to Washington -- and nobody can accuse him of holding a grudge against the United States. Last week, he called for the Obama administration to "stop practices that violate sovereignty."

Previously, Brazil's president, Dilma Rousseff, had also expressed her "indignation" over what Bolivia described as the "kidnapping" of its president, Evo Morales, by the European governments who forced down his plane last month -- on the basis of false allegations that he was transporting Edward Snowden. The Union of South American Nations (UNASUR) issued a strong denunciation, and Argentine President Cristina Kirchner said:

"We believe this constitutes not only the humiliation of a sister nation but of all South America."

Brazil is the main target of Washington's most recent charm offensive, with President Rouseff scheduled for an official state visit in October -- the first to the US by a Brazilian president in nearly two decades. In contrast, the US does not even have ambassadorial relations with Bolivia or Venezuela. Yet, the US attempt to improve relations with Brazil is not going any better than its "diplomatic efforts" with the other left governments of the region.

This is not because these governments wouldn't want better relations. They all, including Venezuela, have significant trade and commercial relations with the US and would like to expand these. The problem is that Washington has still not accepted Latin America's second independence, and expects its southern neighbors to behave in the same embarrassingly obedient way as European countries.

US officials also still fail to understand that they are dealing with a team: they can't be hostile or aggressive towards one Latin American nation and expect the others to give them a big hug. In other words, do not expect better relations between Washington and its southern neighbors any time soon.

On the positive side, Latin America has done quite well over the past decade, since its people became free enough to elect left governments. These have subsequently led the fight for independence and transformed regional relations. Regional poverty dropped from 41.5% to 29.6% from 2003 to 2009, after showing no significant improvement for more than 20 years. Income per person has grown by more than 2% annually over the past decade, as opposed to just 0.3% over the prior 20 years -- when Washington's influence over economic policy in Latin America was enormous.

Related Topic(s): America Culture Of Violence; American Facism; American Foreign Policy; David Miranda; Detention; Edward Snowden; International, Add Tags
Add to My Group(s)
Go To Commenting
The views expressed herein are the sole responsibility of the author and do not necessarily reflect those of this website or its editors.