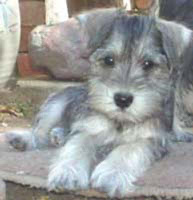 Law enforcement officials in Alabama used a stun gun on a pregnant woman because she refused to turn over her dog, a miniature schnauzer. What was the dog's "crime"? It was playing in its own yard.

The woman brought a civil-rights lawsuit, saying officers had barged into her home over the dog matter and used unlawful force. A federal jury in Mobile last week determined that the officers' behavior was perfectly acceptable.

Am I making this story up? I wish I could say yes--but my imagination is not vivid enough to concoct a story like this. From the title of this blog, it's clear that I am partial toward schnauzers and their owners. Have I lost all objectivity on this subject? Am I coming to the defense of a schnauzer by trying to make noble public servants look bad? I'm not sure it's possible to make these "public servants" look worse than they already do. And how did the clod heads on a federal jury find in favor of officers who apparently acted in an outlandish fashion? I have no idea.

Actually, I do have one idea. I've encountered the plaintiffs' lawyer myself, via a phone call of about 15 minutes duration a couple of years ago. If he left the kind of impression on the jury that he left on me, that might explain an otherwise inexplicable verdict.

As often is the case in situations involving law-enforcement officers and high emotions, it's difficult to tell exactly what happened here. But based on research of several news articles, here is our best guess at what transpired:

Two stray dogs were running loose in Semmes, a community west of Mobile, Alabama. The dogs wound up in the yard of Jennifer Ann Clark, where they proceeded to romp and play with Clark's miniature schnauzer--who apparently never left its own yard. A neighbor must have called animal control about the strays because dogcatcher Vincent Hertz arrived to find them, with the schnauzer, in Clark's yard.

I live in Birmingham, Alabama, and work in higher education. I became interested in justice-related issues after experiencing gross judicial corruption in Alabama state courts. This corruption has a strong political component. The corrupt judges are (more...)
Related Topic(s): Lawsuits; Women, Add Tags
Add to My Group(s)
Go To Commenting
The views expressed herein are the sole responsibility of the author and do not necessarily reflect those of this website or its editors.