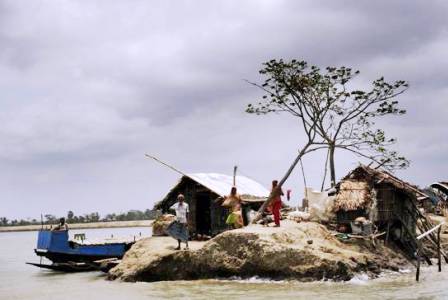 Besides the growing health problems, the changing pattern in climate is gradually affecting the inhabitability of many areas across the globe, particularly the areas on the Asia-Pacific's coastlines.

According to an International Panel on Climate Change (IPCC) assessment report, two million people out of the 250 million people living in the low-lying river megadeltas of these countries will be directly affected from sea level rise by the mid-century.

The situation could be even worse for many small island nations like the Solomon Islands, the Carteret Islands, Micronesia, Palau, Tuvalu, Kiribati (in the South Pacific), and the Maldives (in the Indian Ocean). Most of these island nations are just 1 to 2 meter/s above the sea level.

With the rise of sea-level 'even by a metre' within the century, these small island nations would be submerged under water almost completely, turning millions of inhabitants living in these countries into climate refugees.

In India, coastal landmass with around 20 million inhabitants is predicted to be submerged under water with only a 2 degrees Celsius increase in the temperature. Bangladesh's 6-8% landmass too may be lost to the Bay of Bengal by 2030, and the 'flood-prone areas' of the country may increase from 25% to 40% by 2050. Pakistani province of Sindh and Balochistan too are vulnerable. Inhabitants in these areas could suffer from the decline in drinking-water quality and in fish and shrimp productivity.

Indeed, the rising sea level has been causing saline water from sea and ocean to enter into the freshwater-sources of the coastal landmass of Bangladesh, India, Myanmar, Thailand and Pakistan, and thereby, turning the drinkable water sources into undrinkable ones.

As the ice and glaciers in the Himalayas, North Pole and South Pole have been continuously melting, the sea level will continue to rise deteriorating the condition of the drinkable water sources in coastal areas much worse.

Furthermore, Thai capital Bangkok, which has been sinking on an annual average of 10 centimetres, is at the risk of submerging into the sea within a matter of few decades. As for Myanmar, the aforesaid IPCC assessment reports suggest that a substantial portion of the country's coastal areas will be submerged under water by 2050.

MEASURES MUST BE TAKEN IMMEDIATELY

The world leaders and especially the leaders from the environmentally affected countries must understand that if constructive and effective measures are not taken immediately, millions of inhabitants living in the coastal areas across the globe, including the Asia Pacific region, would face a survival threat.

This article was originally published on Oped Column Syndication.

Bahauddin Foizee is an editor, an analyst and a columnist. His works are mostly focused on politics, geopolitics, security, risk-intelligence (including for investment purposes), environment, refugee scenario, and other aspects of international (more...)