MICHAEL FOX: Workers are striking around Brazil today against President Jair Bolsonaro's push for pension reform. They say if approved, pension reform will drastically decrease benefits and increase the number of years necessary to acquire those benefits. The unions here say that it's a push toward privatization which would be disastrous for workers if this is pushed through, and they say they are up in arms and they've hit the streets. Banks are closed, schools are out, post offices are closed, and public transportation in major cities has been ground to a halt. That's the situation here, with the bus system here in Florianopolis, not happening.

So people have been out since very early this morning, since before dawn, blocking roads around the country. Here people are about to start marching around the city against the pension reform, but also against Bolsonaro's major cuts to to federal universities and to education. Students is one of the main sectors that have come out. Many students slept out at their universities and at their high schools, and were able to come here, and they've been amassing here today. And so they are obviously against the cuts, but they're also against pension reform. They're one of the major sectors that's going to be hit by this pension reform if it is approved, because they say they still have their whole working lives in front of them.

I was interviewing people earlier today, and they say they are ready and they're out in the streets against this. The other thing that people are calling for is the release of former President Luiz Inacio Lula da Silva. Obviously with the recent leaks of The Intercept that came out just this week showing that there was collusion between former Judge Sergio Moro and federal prosecutors in the case against Lula. People are calling for that case to be thrown out and for Lula to be free. They say Lula is innocent, and that he is necessary to be out in the streets. And that is one of the major rallying cries. 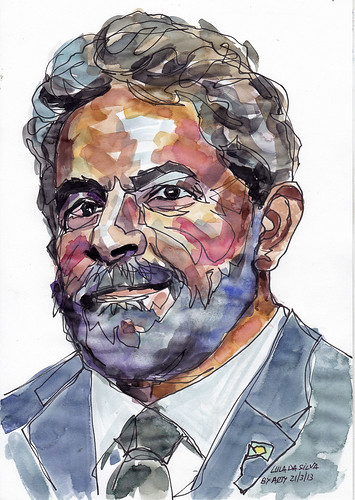 The protests, the manifestations are happening. Demonstrations are happening around the country. [Name inaudible], the president of Brazil's largest labor federation, said earlier that roughly 40 million people were expected to participate in today's general strike. Now, that would rival the general strike of April 2017 against the labor reform under the government of Michel Temer, and that was one of the largest in Brazil's history.

Now, it's still too early to tell exactly the impact that today has had and how many people have participated politically, because the whole focus, the idea today, was for people to strike, to not go to work, and to stay home. Now, we still saw relatively large mobilizations in Rio de Janeiro, Sao Paulo, Florianopolis, and in major cities all around the country. But that was not the focus. That was not the idea. These were not going to be the big protests that we saw over the last few weeks against the budget cuts to education.

Now, that is one thing that the media has already tried to downplay, and show how since there weren't people in the streets then this was a failure. And union leaders already gave a heads up to their members early on that that was not necessarily what was expected, but that is what the media would bethe angle the media would be trying to play. Again, it's hard to tell, also, what kind of an impact this will have on the pension reform being pushed through Congress right now. One thing is for sure. The students, the teachers, the unions, the workers that came out today or that stay home from work have promised they're in it for the long haul, and they're going to continue to fight regardless.

Related Topic(s): Brazilian President Lula Da Silva, Add Tags
Add to My Group(s)
Go To Commenting
The views expressed herein are the sole responsibility of the author and do not necessarily reflect those of this website or its editors.