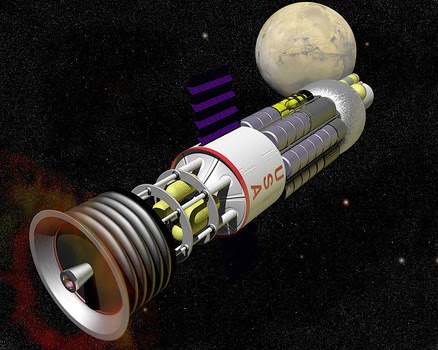 SpaceX CEO Elon Musk is a huge fan of Mars exploration and Mars colonies, and in a new interview he says a launch system to send people to the Red Planet could be available in 10 to 12 years. Requirements: it has to be big, and it has to be launched frequently to send millions of people and tons of cargo space wards.

"We need to develop a much larger vehicle, which would be a sort of Mars colonial transport system, and this would be, we're talking about rockets on a bigger scale than has ever been done before. It will make the Apollo moon rocket look small," said Musk in a recent CBS interview, referring to the 363-foot (110-meter) behemoth that was the Saturn V.

Examiner.com brought this key piece of the issue into focus - what about nuclear power?

Musk did not elaborate about what this super rocket would look like or what technology it might contain. However, back in the late 1950s and early 1960s a group of researchers developed a concept of a spacecraft that would be propelled through the use of nuclear bomb detonations under Project Orion. The project was terminated soon after the Nuclear Test Ban Treaty. In any case the problems of nuclear fallout and electromagnetic pulse caused by the detonation of hundreds of nuclear bombs in the Earth's atmosphere were never resolved.

Certainly a nuclear bomb propelled spacecraft, as large as a World War II battleship, carrying hundreds of colonists, would certainly fit Musk's vision. One way to make it work might be to build the ship in pieces in Earth orbit, beyond the magnetosphere, and then only use the nuclear bomb drive in deep space. Assembling such a vehicle would take a considerable number of launches of conventional heavy lift rockets and a construction project that would dwarf the International Space Station.

For whatever reason, Mr. Big is anxious to get to Mars.  Is it because they know something we don't?  Is it because there is huge money to be made selling us this project of Mars exploration and colonization?  The aerospace industry has said that space development will be the largest industrial project in human history.

Who is going to pay for it?  They are only now privatizing space operations because the taxpayers paid all the years of research & development (R & D) via NASA.  The public pays the R & D and the corporations are brought in once there is "opportunity' for private profit.

Mars though is far away and a dangerous ride it would be.... so much investment is still necessary and they want the public to pay for it.  The global citizen is being asked to pay for space technology R & D - it's the high tech jobs everyone keeps talking about.  So we pay for the freight and once the package gets successfully to the station Mr. Big is waiting at the loading ramp to receive it.

They sell us this vision of new life on an exciting red planet.  Most people could care less.  I am a little suspicious of anyone who is so eager to move from this beautiful planet Earth (in spite of its current environmental crisis) to a dead barren red planet - what is going on there?

Is this some sci-fi movie where a team of ship-wrecked aliens land on Earth, mess everything up and turn the earthlings into slaves to build an escape vehicle back to Mars?  I try to keep an open mind - anything is possible these days......

While we are on this story..... the aliens here are fully in control of the CIA, NSA, Wall Street and such.  They drive BMW's and were somehow linked to Operation Paperclip.  (But that one will wait until a later chapter.) The aliens want us to not only build them an escape vehicle - they also want us to set them up with some fancy residential colonies on Mars.  Terraform the planet so life will be sustainable there.  The nuclear industry is eagerly behind this program.  They envision these colonies to be very dependent on nuclear power generation.  And even nuclear rockets could give Mr. Musk the "lift capacity' he needs to send millions to Mars.

Do they mean millions and millions of dollars are going to Mars or are they talking about sending people?   I can see the strapped-in suckers now riding on the "heavy lift nuclear bomb' with destination Mars painted on the side.   Mars or Bust!   Bust they go and we could eat radiation forever.   Is this the aliens Earth population control program? Dr. Strangelove is back.

Beware of the hustlers.

Related Topic(s): Aliens; Atmosphere; Corporations; NASA; Rocket; Taxpayers; Technology; Universe, Add Tags
Add to My Group(s)
Go To Commenting
The views expressed herein are the sole responsibility of the author and do not necessarily reflect those of this website or its editors.