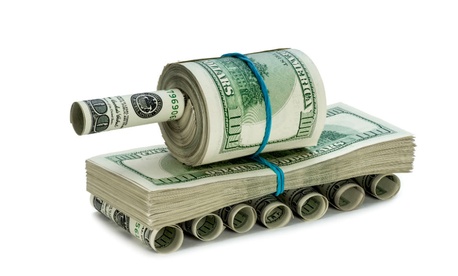 The security of citizens is the biggest priority of any country. It is their responsibility to maintain economic prosperity and peaceful, well-secured being. It appears to be hard to do, due to rise of political tension and other facts related to crime and corruption.

Now it is well known that a lot of attention is given to armed forces; however this is just one element in a chain of proper security. Other elements are healthcare system, education, pension payment; these lead to a better quality of life. Could a few million masks save more lives then a few M1 Abrams tanks? Would the medical equipment be more of a life saver then a weapon? These are the most common questions asked by many. Sadly people are very selfish about their lives and it is not smart to maintain such behavior.

When the coronavirus broke out spreading like wild fire the armed forces weren't the ones to stop it. And the element of healthcare system appeared to be to weak to take any instant actions, which led to many infected and many deaths. Humanity faced many new-born deadly viruses and the leaders had their lesson. But they still got their priorities wrong. Investing more and more in something that is not really necessary--war.

The USA asked its NATO allies to invest more in the armed forces to be prepared for any danger NATO members might face together. But when the real danger appeared, nobody saw it coming. And people struggle once again.

More and more money is going towards the world's military forces. And the US and China are ahead of it. But Germany is on top of the ones to increase its spending. According to DW, The Washington Times and other sources Bundeswehr's spending rose by 10%, which is "the largest defense budget increase among the world's top 15 states".

"There's been pressure on Germany to increase its military expenditure since before the Trump administration," said Max Mutschler from the Bonn International Center for Conversion (BICC), a peace and conflict research institute. "The impact of this pressure is now becoming clear. However, one has to say that expenditure is still well below the 2% mark."

Of the 15 countries in the world with the highest defense budgets, six are NATO members: Canada, France, Germany, Italy, the United Kingdom and the United States. Combined they sum up to almost half of the world's figure. The total military expenditure of NATO's 29 member states was some $1.04 trillion in the past year.

Budget cuts are perfect examples of how the priorities are wrong. An article by Christopher A. Preble, a vice president for defense and foreign policy studies at the Cato Institute, shows us that "Last month, Maryland Governor Larry Hogan called on hospitals to quickly expand the number of beds in the state. Six hospitals reported that it would cost nearly $40 million to add 340 by May 1st. At that rate, the one Navy destroyer in the Trump administration's budget ($1.75 billion) costs as much as 14,870 hospital beds."

According to official statistics the healthcare systems (HCS) mostly receives more money from the governments then their military institutes. But the HCS requires more, in order to maintain its effectiveness, especially during the coronavirus crisis, but we do see that it goes the other way towards military.

Hopefully the world leaders will reconsider their priorities, come to their senses and stop acting like enemies, and start looking into something that really matters like science and the development of other elements. This might just boost our lives greatly.

Jonas Dringelis Editor of "balticword.eu"
Related Topic(s): Budget; Conflict; Coronavirus; Military Spending; Military Spending US; NATO; People; Trump, Add Tags
Add to My Group(s)
Go To Commenting
The views expressed herein are the sole responsibility of the author and do not necessarily reflect those of this website or its editors.