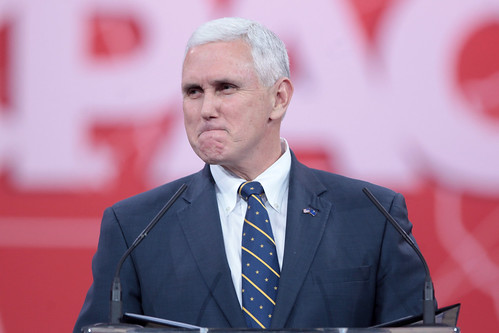 Mike Pence is the poster boy for Voter ID laws. No one has benefited more from this legalized form of vote theft than the Republican nominee for VP. In his acceptance speech at the Republican National Convention in Cleveland last Wednesday, Pence said he "wants every American to succeed and prosper." However, he certainly doesn't want every American to vote. Indeed it was thanks to Indiana's Voter ID laws -- the first of their kind in the nation -- that he squeaked into the governor's office. These seemingly benign laws, requiring voters to show approved photo ID, have a sinister and very deliberate effect: they suppress black, brown, young, old, poor -- and, above all, blue votes. In this week's Best Democracy Money Can Buy, Election Crimes Bulletin, Flashpoint's Dennis J Bernstein gets the lowdown on the sleazy practice of vote-rigging-by-ID-law from political hanky-panky expert Greg Palast. They also discuss how these racist-by-design laws tap dance around voting rights and discrimination protections, and could ultimately help Pence and Trump waltz into the White House.

Dennis J Bernstein: Today Mike Pence is front and center. He's out there on his proverbial knees to greet the Trump helicopter. He's getting ready to accept his party's nomination. But also, as you point out, he's a vote bandit. Tell us the joke about the nuns trying to vote.

Greg Palast: Ten nuns walk into a voting booth. I know that Mike Pence says he's a Christian, but he also stopped 10 nuns from voting -- and that's very important. Mike Pence would not be governor of Indiana if he hadn't figured out a way to knock out black voters, nun voters, student voters, and poor voters.

DB: You are serious about the nuns?

Palast: Yes. Here's the story: In 2008, 10 nuns walked into a voting station, a place where they had been voting for decades, and they were told "Scram sisters!" because Indiana had just passed its Voter ID law. It was the first state in the nation that said you had to have a photo Voter ID. So the nuns proudly showed their driver's licenses, except that the licenses had expired because they were all in their eighties and nineties. But they hadn't expired. Nevertheless, they were told they couldn't vote because they needed a current state ID, even though there's no reason why. There's no logic for any Voter ID because in the 100 years in which records have been kept, not one single person in a 100-year history of voting in Indiana -- not one -- was found to have used someone else's identity. In other words, using identify theft to cast a vote. Because you are going to the hoosegow for a very long time, at least five years under federal law and more under state law. But, nevertheless, this was the first Voter ID law. This is the Voter ID law that Justice Scalia provided the fifth and deadly vote in favor of, saying that it was constitutional and okay under the Voting Rights Act. Now, the Voting Rights Act itself has been killed by the former Scalia court. (Get my FREE COMIC BOOK DOWNLOAD, which includes the NUNS' TALE.)

But here's where Mike Pence comes into the story: we wouldn't have a Governor Pence except for this. The NAACP Legal Defense Fund and the ACLU hired Matt Barreto, who's a great statistician. He calculated that about 72,000 black people in Indiana would be barred from voting by this ID law. Furthermore, students would be barred from voting. You can't use a student ID. You can use a gun ID, but not a University of Indiana ID. Students would be barred, and obviously people who don't drive tend to be poor people, whether they are white or black. Poor people tend to vote Democratic. Black people vote Democratic. Hispanic people vote Democratic -- we're not even counting those yet. Students vote Democratic. So if you add a few more of the blocked voters to the 72,000 African-Americans who are blocked from voting in Indiana, that more than accounts for Mike Pence's very, very slim 80,000 vote margin when he ran for governor of Indiana. So Pence just sneaked by the Democrat, congressman John Gregg, and he sneaked by simply by blocking voters through this racist ID law.

DB: And the lower courts found it to be a real problem. Justice Terence Evans was not all that impressed, was he?

Palast: No. His ruling was that this was just a clear, bold attempt at partisan manipulation of voter rolls by the Republican Party, knowing that they are knocking out their adversaries. But Scalia, being the 5th vote, said, "I don't care." Scalia famously said, "You can always get a non-voter ID." Well, it's kind of a catch 22 -- you need ID to get a non-voter ID. But even if you do, it's an average three bus, all day trip back and forth from a county office -- on average a 17-mile trip. And, as Scalia infamously said, "Seventeen miles is 17 miles, whether you are black or white."

And while it's racist, that's only secondary to their plan. It's partisan, and the interesting thing is that the Republicans in the court say a plan which knocks out your opponents, that's perfectly fine. It just can't be clearly and overtly intended to be racist. Now there was a glimmer of hope, because the devil needed his advocate early and took Scalia from us. And the Texas court of appeals is changing and the Texas ID law, which is also a nasty piece of work. That ruling just came out yesterday.

Related Topic(s): Mike Pence; Nuns; Voting; Voting Reform, Add Tags
Add to My Group(s)
Go To Commenting
The views expressed herein are the sole responsibility of the author and do not necessarily reflect those of this website or its editors.