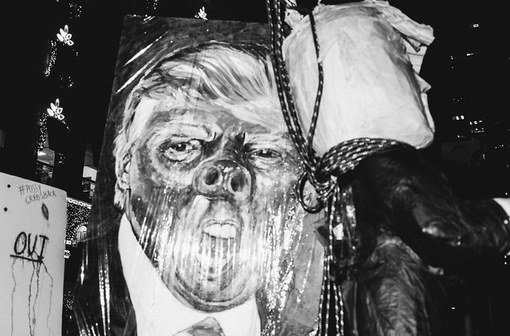 At one of his permanent fascist-style campaign rallies on December 10, 2019, the day the U.S. House of Representatives rolled out Articles of Impeachment, United States President Donald J. Trump told an adoring Pennsylvania crowd that U.S. Senator Elizabeth Warren "has a fresh mouth." The meaning of this insult was understood by his audience. It was that Senator Warren is an uppity woman who talks back inappropriately to male superiors. Trump also repeated his mocking racist reference to Warren as "Pocahontas," a derisive term he fixed on her in 2016 to make fun of her claims of Native American ancestry.

There were just two of many chilling moments in the president's ugly 75-hate-minute harangue. Other low points in the demented fascist oligarch's "speech" included the following:

+Two references to FBI officials who investigated his past Russian connections in 2016 as "scum."

+ Reference to "the so-called articles of impeachment."

+ The absurd claim that the House Judiciary Committee's richly evidence-backed case against him for trying to trade arms to Ukraine in return for that government's assistance to his cause in the 2020 U.S. presidential election as "the weakest impeachment case ever" (Bill Clinton was impeached for lying about sex).

+ The continuation of Trump's longstanding false, racist, and nativist claim (the heart of his 2015 candidacy announcement) that the U.S. is being overrun by "illegal alien" rapists and murderers.

+ The absurd claim that his poll numbers are "going through the roof."

+ Absurd references to the deeply conservative corporate-neoliberal Democratic Party as "the radical Left Democrats" and "the party of socialism."

+ The preposterous and venomous description of Single Payer health insurance (health coverage as a human right regardless of wealth or income) as "crazy socialism."

+ The absurd claim that Democrats support "socialized medicine" and would take away Americans' right to choose their doctors.

+ The bizarre claim that the "do-nothing Democrats" had been "taken over" by the self-declared democratic socialist Congresswoman Alexandria Ocasio-Cortez (AOC).

+ The ludicrous assertion that the Democrats are trying to "overthrow the government."

+ The false claim that a Department of Justice Inspector General's report just released shows that the FBI's investigation of his campaign's Russian ties was a corrupt and partisan abuse of power.

Paul Street (www.paulstreet.org and paulstreet99@yahoo.com) is the author of Empire and Inequality: America and the World Since 9/11 (2004), Racial Oppression in the Global Metropolis (2007), Barack Obama and the Future of American Politics (more...)
Related Topic(s): CNBC; Democrats; Donors; Fascist Americans; Impeachment; Rally; Removal; Resistance; Trump, Add Tags
Add to My Group(s)
Go To Commenting
The views expressed herein are the sole responsibility of the author and do not necessarily reflect those of this website or its editors.