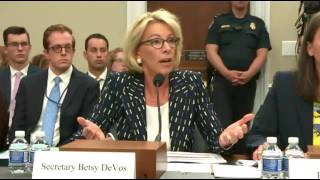 Mick Mulvaney, the guy that Donald Trump put in charge of the Consumer Financial Protection Bureau, announced yesterday that he's dismantling the only office in the entire federal government solely dedicated to protecting student borrowers from predatory student loan companies.

That means that if a bank or lender tries to scam someone trying to get an education, the official policy of the government is now: "Too bad, you're on your own." It's a kick in the ribs to the nearly 45 million Americans already getting crushed with student debt.

Mick Mulvaney
(Image by Gage Skidmore)   Details   DMCA
The CFPB's Office for Students and Young Consumers isn't some basement office that just shuffles papers around. No, this is a powerfully effective watchdog for students that holds giant companies accountable.

It's the office that helped bring down shady for-profit colleges like Corinthian Colleges and ITT Tech that broke the law for lying and cheating students.

It's the office that investigated giant banks and credit card companies like Citibank, Wells Fargo, and Discover for illegal student loan practices.

It's the office that returned over $750 million to student loan borrowers who were victims of predatory loans -- and the office that pored over 60,000 complaints from students across the country.

It's the office that has sounded the alarm about unique issues facing older Americans, public service workers, and military personnel and veterans with student loan debt.

And it's the office that investigated Navient, the nation's biggest student loan servicing company -- which is in the middle of a lawsuit with the CFPB -- for defrauding tens of thousands of borrowers.

We already know Betsy DeVos is in the pocket of student loan companies, and now it's clear Mick Mulvaney is, too. Don't forget: This is the same Mick Mulvaney who bragged to a room full of bankers a few weeks ago that his congressional office wouldn't take meetings with lobbyists unless they donated to his campaign first.

His corruption is blatant, and his priorities are clear: He only cares about coddling powerful, deep-pocketed special interests -- the very same institutions that the CFPB is supposed to protect people from.

And recently, the New York Times published an article about how Mick Mulvaney is thrilled to implement his far-right ideology at the CFPB by undermining it from the inside. Another one of Trump's henchmen said this about Mick Mulvaney:

"There are lots of targets of opportunity over there [at the CFPB] for Mick...He's like a mosquito in a nudist colony."

Related Topic(s): Betsy Devos; Corruption; Credit; Education; Mick Mulvaney; Student Debt, Add Tags
Add to My Group(s)
Go To Commenting
The views expressed herein are the sole responsibility of the author and do not necessarily reflect those of this website or its editors.