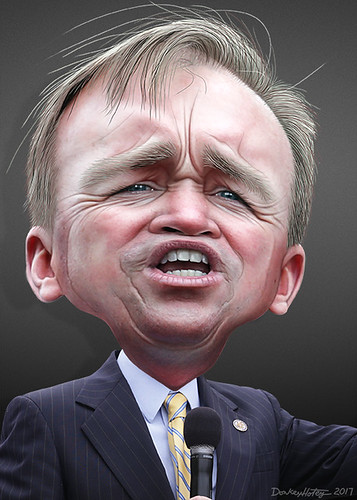 Most people have probably heard about Mick Mulvaney's seizure of the Consumer Financial Protection Bureau (CFPB) as Donald Trump's appointed "acting director." They probably don't realize quite how outrageous this move is.

First, it is worth noting that Mick Mulvaney openly holds the CFPB in contempt. When he was still in the House of Representatives he referred to it as a "joke." Mulvaney has made it clear that he would be happier if the CFPB did not exist. Appointing him as acting director is a bit like selecting a hard--core atheist as the next pope.

It is also worth placing the CFPB in a larger economic context. The CFPB's general purpose is to protect people who are less financially sophisticated from predation by the financial industry. While it does perform this purpose, it also is working to make the financial industry more efficient, insofar as it succeeds in this effort.

Remember, the economic purpose of the financial industry is to allocate credit to those who need it. In principle, we want to use as few resources as possible in this process. If we only need one million people rather than two million people to issue and service loans and perform other financial operations, then we have freed up a million people to work in health care, education, or other productive sectors of the economy.

If financial corporations think they can make lots of money by writing deceptive contracts and abusive practices towards their customers, we know they will devote lots of resources to writing deceptive contracts and engaging in abusive practices. If the CFPB can shut down this avenue for making profits, then the people working in the financial sector will actually be focused on providing customers a service, rather than ripping them off. This is a gain to the economy as a whole.

Trump's decision to appoint Mulvaney was obviously intended to neuter the CFPB and reopen the door to all sorts of predatory practices. In carrying through this appointment, Trump was not only circumventing the order of succession laid out in the law creating the CFPB, he was also undermining the explicit intention of Congress for the CFPB to be an independent bureau.

No one disputes that President Trump has the right to appoint the replacement for outgoing director Richard Cordray. However the law is written so that he would have to nominate someone who would go through the Senate approval process. This means that Trump's candidate would have to make various disclosures and undergo questioning by members of the Senate.

Furthermore, once the nominee was approved by the Senate, he or she could only be removed for cause. Trump would not have the authority to remove his pick to the head the Bureau simply because he disapproved of their decisions in this capacity.

By contrast, Mulvaney has made no disclosures and was not subject to any questions from the Senate. He also has no independence from President Trump. He can be removed any day of the week for any reason. In fact, since Mulvaney's day job is running the Office of Management and Budget, where he also serves at the will of the president, he risks being fired from two jobs if he does anything that gets Donald Trump angry.

The use of an acting director, in this case, is not an accident. Cordray's plans to leave the CFPB before his term ends next summer were widely reported in the media. There is no reason that Trump could not have had a successor already selected whose name could be given to the Senate as soon as Cordray formally announced his resignation. Trump chose to go the Mulvaney acting director route precisely to circumvent this process.

Unfortunately, this is not the only case where Trump has appointed "acting" officials to head nominally independent agencies, thereby avoiding the constitutional requirement for the Senate to give its "advice and consent." Keith Norieka, a person who had a career in the financial industry, with no regulatory experience, served as acting Comptroller of the Currency for six months, just recently being replaced by Trump's nominee for this position.

Perhaps even more disconcerting is Trump's selection of David Kautter as acting director of the Internal Revenue Service (IRS) when the term of the previous director ended November 13th. Here also, there is no excuse for not having a nominee to submit to the Senate. The expiration of the IRS director's term is set in law, so Trump's team knew about this opening the day he was elected.

As is the case with Norieka, Kautter has no experience in enforcement. His background was in running tax avoidance scams at one of the country's largest accounting firms. And, this acting director of an ostensibly independent agency, like the other acting agency heads, can be fired by Trump any day of the week for any reason.

Congress could put a stop to this abuse of the authority to appoint "acting" heads of agencies and departments. There is not much ambiguity about the words "advice and consent," and there is neither with these and other acting appointees. But the Republicans in Congress don't really care much about the constitution because right now, rich people need tax cuts.

Dr. Dean Baker is a macroeconomist and Co-Director of the Center for Economic and Policy Research in Washington, D.C. He previously worked as a senior economist at the Economic Policy Institute and an assistant professor at Bucknell University. (more...)
Related Topic(s): Agencies; Consumer Financial Protection Bureau; Corporations; Financial; Mick Mulvaney; Replacement, Add Tags
Add to My Group(s)
Go To Commenting
The views expressed herein are the sole responsibility of the author and do not necessarily reflect those of this website or its editors.