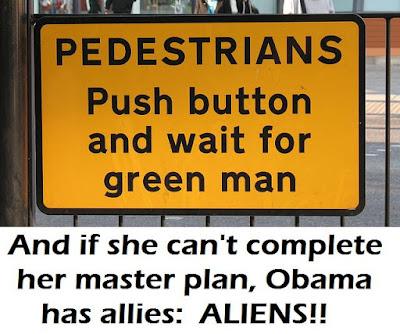 That's right! Evil Michelle Obama has finally begun to commit genocide by having every American walk HEADLONG INTO TRAFFIC!

First lady Michelle Obama's campaign to get people to exercise outdoors might be a factor in an increase in the number of pedestrian deaths during the first half of last year, according to the Governors Highway Safety Association.

It's all in their master plan, I tell you! Pretending to get America fit! Ha! Vicious attacks on childhood obesity! Scrawny kids mean socialism!

Just about every First Lady has had some worthy cause to promote: with Jackie Kennedy, it was the rescuing of the White House from Mamie Eisenhower's ubiquitous pink. Lady Bird Johnson wanted us to plant more flowers alongside freeways.  Betty Ford's cause spawned a plethora of alcohol clinics. Rosalind Carter went mental ... ah, went with mental health treatment reform. Nancy Reagan's cause was drugs - anyone else's, that is.  Barbara Bush championed literacy by penning her dog's diary (that's "literacy" not "literature"), Hillary Clinton took up the cause of health care reform before anyone knew about "death panels." Laura Bush kept up her mother-in-law's literacy legacy by trying to prove that her husband could read. Even Dolley Madison had a worthy cause: ice cream.*

Whatever the cause, however, no First Lady has ever been castigated for it...until Michelle Obama's cause: childhood obesity and national fitness. A worthy, if innocuous, cause you say? No, say some on the Right. The latest accusations bandy about the words "nanny state" "incredibly insulting to parents." and now "killing pedestrians."  When caught eating a barbecued spare rib, Michelle Obama was looked upon as a hypocrite by the biggest one of all: Rush Limbaugh.

"Leaders are supposed to be leaders. If we are supposed to eat roots, berries and tree bark, show us how."
"Our First Lady does not project the image of women you might see on the cover of the Sports Illustrated Swimsuit issue!"

And Michele Bachmann, ever the creative critic (she does, after all, spell her name with only one "l" unlike the First Lady. And that pesky Malkin copies her all the time!) did not pick on the fitness issue. She headed straight for the heart of the matter: breasts. Commenting oh-so-delicately about Obama's recommendation that children who were breast fed might avoid obesity, Bachmann brought forth her "nanny state" meme with  "to think that government has to go out and buy my breast pump for my babies."

Of course, comments like that have sparked a host of criticisms against Limbaugh, Bachmann, Mitt Romney and others who have taken pot shots at the First Lady. The comments are ludicrous, of course, but the real problems attached to these comments are that they are cheap shots, and smell of the "let's get Obama and the whole family ... or else!"

Glenn Beck has made no bones about the fact that he hates and mocks the entire Obama family. Now with Limbaugh and certain politicos jumping on the "tear down anything" bandwagon, who knows who or what will be targeted next. Is there a media moratorium on White House Dogs?

Nasty is as nasty does.

*On the history of ice cream, wikipedia:

One respected history of ice cream states that, as the wife of U.S. President James Madison, she served ice cream at her husband's Inaugural Ball in 1813. 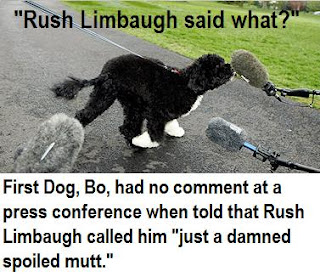 Rev. Dan Vojir is has been writing/blogging on religion and politics for the better part of ten years. A former radio talk show host (Strictly Books " Talk America Radio Network) and book publisher, Dan has connected with some of the most (more...)
Related Topic(s): Bachmann-Michele; Fitness; Glenn Beck; Hypocrisy; Michelle Malkin; Michelle Obama; Obesity; Rush Limbaugh, Add Tags
Add to My Group(s)
Go To Commenting
The views expressed herein are the sole responsibility of the author and do not necessarily reflect those of this website or its editors.