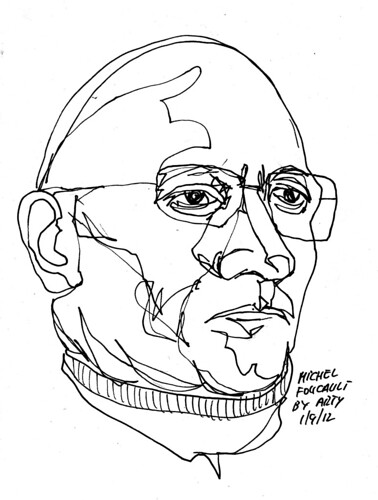 In the present 2,800-word review essay, I plan to discuss the Russian philosopher Sergey S. Horujy's book Practices of the Self and Spiritual Practices: Michel Foucault and the Eastern Christian Discourse, edited with an instructive introduction by Kristina Stoeckl, translated from the Russian by Boris Jakim (Grand Rapids, Michigan [USA]: William B. Eerdmans Publishing, 2015; orig. Russian ed., 2010).

Horujy is the founder and director of the Institute of Synergic Anthropology in Moscow and honorary professor of the UNESCO Chair for Comparative Studies of Spiritual Traditions in St. Petersburg.

As the subtitle of Horujy's book indicates, he discusses Foucault's late thought (1980-1984) about practices of the self in relation to the spiritual practices in Eastern Orthodox discourse. In Foucault's late thought, he discusses patristic and medieval Christian thought, including the thought of Christians who influenced and still influence -- Eastern Orthodox discourse.

Then as more and more posthumously published books by Foucault came out, including his lectures at the College de France in 1980, 1981, 1982, 1983, and 1984, the turn his thought had taken in the late period of his life emerged more clearly, especially his discussions of patristic and medieval Christian thought about spiritual practices such as confession and spiritual direction.

Now, in 2018, volume four of The History of Sexuality was published in French as The Confessions of the Flesh. When an English translation comes out, it could spur new interest in Foucault's late thought in the United States (where his earlier body of work has been influential in certain elite universities such as UC-Berkeley).

In the United States, in recent decades, we have been inundated in discussions about the teachings of the Roman Catholic Church about sex some of which have deep historical roots.

Will the proverbial **** hit the fan when the English translation of Foucault's posthumously published book The Confessions of the Flesh is published?

It could. Stay tuned.

Related Topic(s): Aristotle; Christian Religion; Christian Values; Philosophy; Philosophy; Plato; Sex; Sex; Sexuality; Socrates; (more...) Spiritual, Add Tags  (less...)
Add to My Group(s)
Go To Commenting
The views expressed herein are the sole responsibility of the author and do not necessarily reflect those of this website or its editors.