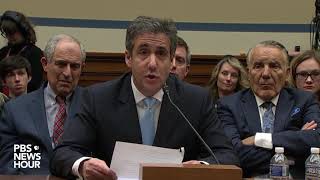 While Attorney General Bill Barr has been hiding the Mueller report from Congress, and Donald Trump has been running around claiming full exoneration (a claim sadly repeated by many traditional news outlets and Very Serious People in the media), Michael Cohen has been very busy combing through his records, records that were recently returned to him by prosecutors.

In an interview on MSNBC's The Beat with Ari Melber, Cohen's attorney, Lanny Davis, told Melber that Cohen has given new evidence of crimes to prosecutors in the Southern District of New York. Here's the exchange between Davis and Melber (the entire interview can be seen below):

Melber: Are you suggesting he has additional evidence beyond what he laid out in his congressional testimony?

Davis: That is correct. And he also has additional information for the Southern District of New York involving other criminal behavior.

Davis also marveled that no charges have been filed against Trump. Organization executives Donald Trump Jr. and Allen Weisselberg, who were clearly implicated in the criminal conspiracy to illegally reimburse Cohen for hush money related to the Stormy Daniels case. Davis noted how exceptionally rare it was for someone to publicly testify about crimes committed by a sitting president, both before and after he took office, and have nothing come from that. He further noted that while there might be objections to indicting a sitting president, Donald Jr. and Weisselberg are not covered under any similar legal arguments, and it is truly puzzling that they have not yet been charged.

In related news, Cohen (via his attorneys) reached out to Congress this week to say he has been going over the devices and files returned to him by the SDNY and has retrieved 14 million files from a hard drive. Those files contain "emails, voice recordings, images and attachments from Mr. Cohen's computers and phones. To date, Mr. Cohen has located several documents that we believe have significant value to the various congressional oversight and investigation committees."

Cohen and Davis are asking for Cohen's prison sentence to be delayed so that he can continue to comb through these records to provide additional information to prosecutors, and they note the injustice of Cohen being the only Trump Organization employee to be doing prison time for these crimes.

Finally, in closing, we write this as Mr. Cohen's attorneys, as well as those who believe in basic justice. It is a fact that Mr. Cohen remains the only member of the Trump Organization, including Mr. Trump himself, who has been prosecuted and who is going to prison for conduct almost all of which was for the benefit of Mr. Trump personally and indeed directed by him. In our opinion, there is something unjust here. In addition, it is our professional opinion that the length of the sentence to which Mr. Cohen was subjected is, most respectfully, disproportionate given the particular facts and circumstances underlying each of the crimes to which Mr. Cohen pled guilty.

In addition to that letter, Davis sent a 12-page memo to House Democrats. From BuzzFeed:

In a 12-page memo sent to top House Democrats, Cohen's attorneys said Trump "encouraged Cohen to lie and say all Moscow Tower project contacts ended as of January 31, 2016 using 'code' language telling Cohen during various conversations that there was 'no collusion, no Russian contacts, nothing about Russia' after the start of the campaign. [...]"

The more than 100 pages of documents included with Cohen's memo claim to lay bare a "conspiracy to collude" with the Russian government during the campaign, along with an array of other crimes by the president. The memo also for the "first time discloses Michael Cohen's testimony to the Mueller team and to other non-public testimony to congressional committees," according to Cohen's legal team.

Related Topic(s): Crime; Injustice; Investigation; Michael Cohen, Add Tags
Add to My Group(s)
Go To Commenting
The views expressed herein are the sole responsibility of the author and do not necessarily reflect those of this website or its editors.