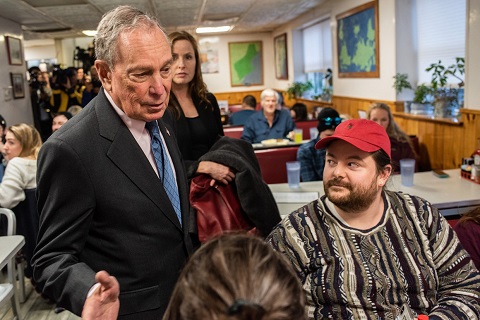 The Democratic National Committee is ready to boost Bloomberg into the top tier
(Image by politico.com)   Details   DMCA

We haven't seen his name on any of the ballots in the first four states, but that's about to change. I'm talking, of course, about multibillionaire presidential hopeful Michael Bloomberg.

Bloomberg has a chance of winning the presidency because his net worth is more than $60bn.

The yearly return on $60bn is at least $2bn which is what Bloomberg says he'll pour into buying the highest office in the land. It's hardly a sacrifice for him, but it's a huge sacrifice for American democracy.

Encouraged by the murky outcome from the Iowa caucuses and the notable lack of enthusiasm for Joe Biden, Bloomberg has decided to double his spending on TV commercials in every market where he is currently advertising, and expand his campaign field staff to more than 2,000.

He's not competing in the first four states with caucuses and primaries but focusing instead on 3 March. So-called "Super Tuesday" will be more super than ever because it now includes California, Texas, Virginia, Minnesota, North Carolina and Massachusetts a third of all delegates to the Democratic convention.

"It's much more efficient to go to the big states, to go to the swing states," Bloomberg told the New York Times. "The others chose to compete in the first four. And nobody makes them do it, they wanted to do it. I think part of it is because the conventional wisdom is, 'Oh you can't possibly win without them.'"

Later, he added: "Those are old rules."

Yes, and the new rules are also to spend billions of your own money, if you have it.

In January alone Bloomberg spent more than $300m on advertising for his campaign. That's more than Hillary Clinton spent on advertising during her entire presidential run in 2016. It's multiples of what all other Democratic candidates have spent, leaving even Tom Steyer, another billionaire, in the dust.

The heart of Bloomberg's campaign message is that he has enough money to blow Trump out of the water. As if to demonstrate this, Bloomberg bought a $10m Super Bowl ad that slammed Trump in the middle of the big game, then bashed Trump again in a national ad just hours before the State of the Union address.

"The Real State of the Union? A nation divided by an angry, out of control president," a narrator says. "A White House besotted by lies, chaos and corruption."

If Trump's tweets are any barometer, Bloomberg's tactics are getting under the thin-skinned president's fragile epidermis. According to one Trump adviser, the president "thinks that money goes a long way" and those who believe Bloomberg has no hope are "underestimating him". Another says Trump "takes money seriously. He's a businessman."

The Democratic National Committee is ready to boost Bloomberg into the top tier. Last Friday it abandoned one of its criteria for getting on to the coveted debate stage the individual-donor threshold, which was used for the first eight debates including this week's event in New Hampshire presumably because Bloomberg doesn't take donations.

To participate in the 19 February debate in Las Vegas, candidates will need to show at least 10% support in four polls released from 15 January to 18 February. Three candidates have met that threshold: Joe Biden, Bernie Sanders and Elizabeth Warren. Bloomberg's wall-to-wall advertising is giving him a good shot.