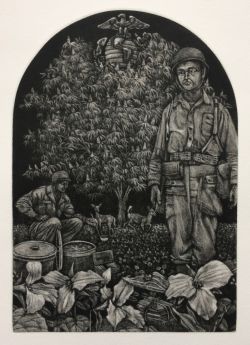 Memories of Those in Service to Others
(Image by Akemi Ohira)   Details   DMCA
The truth that hurts: America's character decay neither began with our 2016 election, nor will end with our 2020 Census and election duo. The truth that sets us free: most of America's problems have come from placing too much trust in leaders in both public and private sectors, who think, act and look like Trump/Pence.

So, this Memorial Day weekend, may our memories of mothers memorizing faces of missing children and loved ones in uniform snatched away, let us honor all who have been subjugated by men believing themselves masters of all, promising them, never again.

Who suffers in the dissonance of missives tweeted to distract coal miners and manufacturing workers from broken promises, if not family farms and small businesses traded to death by a money launderer?

What's trending with Trump/Pence administration for people of color, affordable healthcare and women and children? Will a president, allowed to evade subpoenas, honor decisions of federal judges?

If Justice Anthony Kennedy, Rod Rosenstein and Robert Mueller weren't America's heroes, are We the People all that stands between American democracy and mob rule?

Why are Americans at Trump rallies hypnotized into following, an existence unmolested by the rumbling of a soul?

Before December 7, 1941 most American citizens and their elected officials had little desire to enter a second world war. So, we waited and hoped for a miracle. However, we learned, while there is good in most people, some, only emit moral bankruptcy.

Before September 11, 2001, most American citizens and our elected officials thought oil barons and gas guzzlers more praiseworthy than Henrietta Lacks. However, Bush/Cheney/Rice/Wolfowitz Mushroom Cloud manipulation, of both facts and congress, denied us the hard truth, except that of young 1% volunteers marching off to war for the one percenters too big to fail, or jail depositing all of us into the, Friends of Dick Cheney's 2008 Recession Club with yields of madmen making derivative memories, yearning to maximize a new Iranian chapter of memorials.

So, in 2019, we're left engulfed in needless trade wars because of the madness of a mischievous Juvenile-in-Chief motivated in Roosevelt Room to master intimidation of clingers on, magnetized by malfeasance.

Memories of 5th Avenue, the Halls of Congress, city Food Deserts, rural neighbors without high-speed Broadband and Americans living in Puerto Rico deserted confirms our Land of the Free, is overshadowed by a prince of darkness.

However, while much of America's history has been maneuvered for personal gain by older Caucasian men, there are fewer men maddened by the fear of the 2045 missive: muffled memories will suddenly manifest with a mighty righteousness propelling all Native Americans, people of color, LGBTQ and Constitutionally locked out female Americans to lavish on any face paler than their own, bearing a penis, the same maltreatment they received from wannabe masters of greed and oppression before December 31, 2044.

But fear not for most Americans are not petty like Trump, hypocritical as Pence, hateful as McConnell, small as Mnuchin. Most presidents don't rip children from their parents. Most VP's don't ignore Jefferson's separation of Church and State wisdom. Although admittedly, too many political clones, drunk on McConnell's magic potion, put Party before 99% of Americans, most aren't bigots who financially honor murderers of Native Americans over lifesavers like Harriet Tubman.

When will our short-term memory memorialize the bait and switch from Garland to Gorsuch & Kavanaugh and adjudicate operatic mood swinger Lindsey Graham, First Chair Grassley, Super Hatch and their masterly Maestro Mitch McConnell?

Most men are neither rapists nor pedophiles, and most in public service put their lives on the line to save others[MR1] . Most Americans, particularly teachers, first responders and Trump maligned FBI agents and news reporters, are pro-life for all lives from Alpha to Omega.