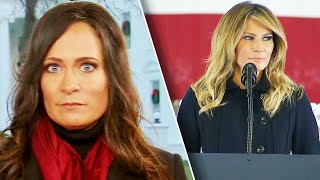 Now that we have all had sufficient time to grieve the tragic loss of resigning White House press secretary Sarah Huckabee Sanders, who had developed such a phobia of the White House briefing room that she could no longer enter it and, sadly, was reduced to holding her press scrums on the outside driveway, it is time to look at the new hire for her position.

Stephanie Grisham was previously the communications director for Melania Trump, the second easiest job in the White House, where she communicated not very damn much from the usually silent first lady but served a secondary role as private enforcer, engineering the ouster of a deputy national security adviser who had pissed Melania off.

The Washington Post reminds us of Grisham's Arizona version. After reporter Hank Stephenson broke the story of Republican House Speaker David Gowan using state-owned vehicles to crisscross the state for campaign events, which is extremely crooked -- and for which Gowan had to reimburse taxpayers to the tune of $12,000. Grisham suddenly invented a new "protocol" of subjecting statehouse reporters to background checks, informing reporters that any with violent felony convictions or by-the-way misdemeanor trespassing charges would be barred from the House floor. The misdemeanor trespassing bit was clearly an add-on meant to nix Stephenson, and only Stephenson, who had previously pled guilty to such a charge.

It quickly became a nasty fight, the entire local press corps refused to sign the new forms, and Grisham backed down. But Stephenson told the Post he still maintained a cordial relationship with her afterward -- until 2017, when he exposed that she was still collecting state paychecks during an eight-week period she was traveling the country with Trump as he prepared to assume his White House "duties." Grisham threatened to sue, and that was the end of "cordial."

So the short version is that we can assume there will be very little change in how the White House treats the press under Grisham. The Jim Acostas of the press corps will still be targeted for insufficient deference, and stories about administration corruption will continue to draw special fury from Team Trump.

But maybe -- we don't know for sure -- the White House will let her give briefings under a roof, instead of on the driveway. Presuming there are briefings at all, of course.

Related Topic(s): Press Secretary; Republican; Stephanie Grisham; White House Press, Add Tags
Add to My Group(s)
Go To Commenting
The views expressed herein are the sole responsibility of the author and do not necessarily reflect those of this website or its editors.