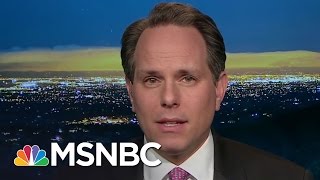 MSNBC has a trio of darlings who comment nearly every day on Donald Trump, his administration, and the disaster that has befallen the American government with his election. Jeremy Bash, Chuck Rosenberg, and Matthew Miller are ever so well-informed, so experienced, and so insightful that they appear on virtually every show the network has, from "Morning Joe" at the start of the day to "The 11th Hour" at the end of it. But who are these guys? What are their biases? And why should we respect anything they have to say?

Jeremy Bash is the former chief of staff to Leon Panetta during the latter's time as both CIA Director and Defense Secretary. Earlier in his career, he was a law clerk for Judge Leonie Brinkema in the federal Eastern District of Virginia. (Brinkema is the judge who sent CIA whistleblower Jeffrey Sterling and me to prison, who has reserved the Edward Snowden case for herself, and who is apparently overseeing the case against Julian Assange.)

Before signing on with Panetta, Bash had served as national security advisor on the 2000 Gore/Lieberman campaign, focusing mostly on the Middle East peace process, counterterrorism, counternarcotics, and counterproliferation. He then went to the Washington law firm of O'Melveny & Myers, one of the most prominent firms in the city, concentrating on congressional investigations and litigation. It was from that position that he moved on to the House Intelligence Committee, where he was minority chief counsel and the top intelligence advisor to Rep. Jane Harman, who later became the committee's chairman.

Bash was in one of the senior-most positions in the CIA (remember, focusing on counterterrorism) when Panetta, his boss, decided to illegally give classified briefings over a classified mock-up of the Osama bin Laden house to the producer, director, and screenwriter of the film Zero Dark Thirty. That film falsely credited the CIA's torture program with leading to bin Laden's location. Weeks later, Panetta (again illegally) revealed the name of the Navy Seal who killed bin Laden during a classified speech where the same producer, director, and screenwriter were present. Panetta later apologized. As chief of staff, Bash would have reviewed the speech first and would have known that there were uncleared attendees. He did nothing to stop the disclosures.

Chuck Rosenberg also has had a long career in government. He was an Assistant US Attorney in the Eastern District of Virginia, arguing cases before Leonie Brinkema, where he successfully prosecuted NFL quarterback Michael Vick and "the 20th hijacker," Zacharias Mousawi. He then became counsel to the FBI Director, counsel to the Attorney General, and then chief of staff to the Deputy Attorney General. He also clerked for Judge T.S. Ellis, who gained notoriety last week when he sentenced former Trump campaign chairman Paul Manafort to 47 months in prison on multiple charges of fraud and official corruption. He was named US Attorney for the Eastern District of Virginia, US Attorney for the Southern District of Texas (all under George W. Bush), and later chief of staff to FBI Director James Comey. At the end of the Obama administration, Rosenberg became director of the Drug Enforcement Administration, but resigned in protest in 2017 when President Donald Trump told a gathering of DEA agents that they should "rough up" drug suspects a little. He then went directly to MSNBC.

Matthew Miller is my least favorite of the three. Miller is a former functionary from the Democratic caucuses in both the House and the Senate. He headed communications for John Kerry's 2004 presidential campaign in Florida and later went to work for Chuck Schumer at the Democratic Senatorial Campaign Committee. Interestingly, on his personal website, Miller even claims credit for eight Democrats being elected to the Senate in 2008. A year later, he joined the Obama administration as the Justice Department spokesman, working directly for Attorney General Eric Holder.

(It was in this capacity that Miller gleefully announced my arrest in January 2012, calling me a "bad actor" and saying that I was a threat to the national security. He later echoed Brinkema's self-serving comment at my sentencing in which I received a sentence of 30 months that I deserved at least a decade in prison, adding "Sometimes the difference between blowing the whistle on wrongdoing and exposing a legitimate national security program is in the eye of the beholder. But some things are secret for a reason, and when government employees violate the law to disclose information that undermines our national security, there must be consequences. It may not be popular, but the administration is right to enforce these laws." Miller has continued to speak out against me and other national security whistleblowers, especially Sterling and NSA's Thomas Drake on MSNBC and in events at the National Press Club.")

So these are the Washington experts, the swells, who are "educating" us at MSNBC. They're all deep state actors with a vested interest in maintaining the same federal status quo that is the root of the problem. The problem with our government isn't just Donald Trump. The root of the problem is that we have thousands of federal employees who answer to no one. They are involved in a revolving door of senior-level federal jobs. They move back and forth between the halls of power, the major law firms, the K Street lobbying firms, and the media. And worse, they're almost certainly going to return to government when Trump is no longer in the White House, where they'll have even more senior positions. It's a never-ending cycle.

There's still another question: What is MSNBC going to say when their talking heads are back in power? Will they criticize them? Will they call them out when they violate our civil rights and civil liberties, which of course they will do? Or will they give them a pass and welcome them back into the fold when they finish another round as our federal overseers. I expect the worst.

Related Topic(s): Federal Employees; Investigations; Jobs; Media; Media Network MSNBC; Whistleblower, Add Tags
Add to My Group(s)
Go To Commenting
The views expressed herein are the sole responsibility of the author and do not necessarily reflect those of this website or its editors.