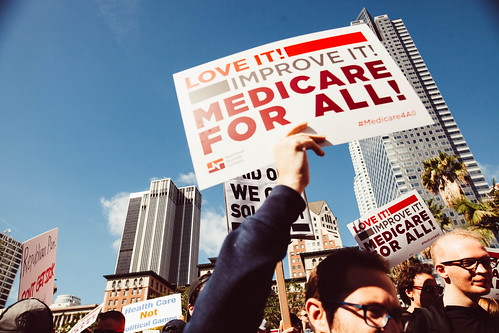 The RootsAction.org Team has created an excellent flyer headlined "We want Medicare for All. Not healthcare profiteering for the few."

They were at the California Democratic Party convention a few days ago, making sure most of the delegates got the flier, noting, "By far, it was the most widely read and discussed handout of the entire historic convention, which featured presentations by many of the presidential contenders."

When you bump into someone who thinks Medicare-for-All is going to take something away from them instead of give them valuable benefits, this is the info to offer. The content and links are below. Bernie Sanders and Elizabeth Warren are currently the only two presidential contenders with Medicare for All in their platforms.

We want Medicare for All.
Not healthcare profiteering for the few.

Two prominent candidates for the Democratic presidential nomination are not just opposing Medicare for All, they keep denouncing and distorting it.

Joe Biden recently called Medicare for All "ridiculous." And when Pete Buttigieg launched an advertising campaign against Medicare for All this fall, he declared that unlike the proposals from Bernie Sanders and Elizabeth Warren his healthcare policy prescription "doesn't dictate it to the American people and risk further polarizing them."

But we aren't aiming to "dictate" to the American people. The California Democratic Party has long supported single-payer Medicare for All because "healthcare is a human right not a privilege."

We are deeply dismayed that Buttigieg and Biden have opened up a double-barreled assault on Medicare for All. Their inaccuracies have forced us to respond by laying out the facts. The "public option" plans they're touting would not fulfill the human right of healthcare for huge numbers of Americans. Millions would remain uninsured, millions more underinsured. And those plans don't make economic sense.

Mayor Buttigieg is using the slogan "Medicare for all who want it." But Congressman Ro Khanna has pointed out that such a setup "won't bring the administrative costs down of private insurers or maximize negotiation with Big Pharma and hospitals." And: "This means higher premiums, higher drug costs, higher deductibles, and more denied claims for the middle class." This also means less healthcare for lower-income people.

Major sources of Buttigieg's and Biden's funding are in harmony with their current hostility toward Medicare for All. "Pharmaceutical, health insurance, and hospital industry donors have flocked to Mayor Pete all year," investigative journalist Alex Kotch reported. "As of mid-2019, he was second only to Donald Trump in overall campaign cash from donors in the health sector. Among Democratic candidates, he was second to former Vice President Joe Biden in terms of pharmaceutical and health insurance donations."

Sadly, Buttigieg is claiming that Medicare for All would precipitously dump people off of health coverage and deprive them of "choice." Those are insurance-industry talking points. He is deliberately confusing the current "choice" of predatory for-profit insurance plans with the genuine full choice of healthcare providers that enhanced Medicare for everyone would offer.

Meanwhile, Biden has been using scare tactics and sending out absurd messages like this recent tweet: "Let's put this in perspective: if you eliminate every single solitary soldier, tank, satellite, nuclear weapon, eliminate the Pentagon and it would only pay for 4 months of Medicare for All. 4 months. Where do the other 8 months come from? Your paycheck."

That's not the kind of leadership we need for healthcare in our country.

Related Topic(s): Bernie Sanders; Elizabeth Warren; Health-Medicine-Wellness; Medicare; Medicare For All; Senator Elizabeth Warren, Add Tags
Add to My Group(s)
Go To Commenting
The views expressed herein are the sole responsibility of the author and do not necessarily reflect those of this website or its editors.