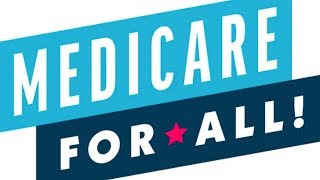 Medicare for All Might Unite the Nation
(Image by YouTube, Channel: The Real News Network)   Details   DMCA

We need a health care system that reflects our values.

No American should ever die or go bankrupt because of health care costs. And no for-profit insurance company should be able to stop any American from getting the care they need.

Health care is a human right, and that's why I'm fighting for Medicare for All. It's the only plan that gives everyone in America full coverage, with the freedom to see any provider, with no premiums, copays, and deductibles -- no restrictions, no surprises, and no one going broke because they get sick.

Today, I'm releasing my plan to pay for Medicare for All. My plan won't raise middle-class taxes by one penny. In fact, my plan puts $11 trillion back in the pockets of American families by virtually eliminating their current premiums, deductibles, and copays -- that's bigger than any tax cut in American history.

To cover the cost, we start by taking the money that employers are currently paying in the form of premiums to private insurance companies and have them pay it to Medicare instead.

We make up the difference with targeted spending cuts, new taxes on giant corporations, Wall Street, and the richest 1%, and cracking down on tax evasion and fraud.

My daddy's heart attack nearly sent our family skidding over a financial cliff.

Today, I think about all the kids this year who will face the double blow of nearly losing a parent and then watching their lives turn upside down as their families struggle to pay a growing stack of medical bills.

I spent my career studying why so many hard-working middle-class families were going broke. For years, my research partners and I traveled across the country, from bankruptcy courtroom to bankruptcy courtroom, talking directly with people who'd seen their lives turned upside down.

One of the biggest reasons we found? Medical problems. In 2007, my research found that the number one reason families were going broke was health care -- and three quarters of those who declared bankruptcy after an illness were people who already had health insurance.

Between 2013 and 2016, the number one reason families went broke was still because of health care -- even though 91.2% of Americans had health insurance in 2016.

It's clear: Families are getting crushed by health costs. But you know who's doing great? Private health insurance companies -- they're sucking billions of dollars in profits out of the system.

Under Medicare for All, we'll rein in the corruption, waste, inefficiency, and corporate profiteering in our health care system.

Everyone's covered, it's fully paid for, and independent economists have verified that it's doable. This is how we end the stranglehold of health care costs on American families and provide one of the greatest federal expansions of middle-class wealth in history.

Related Topic(s): Corporations; Medicare For All; Money; Taxes, Add Tags
Add to My Group(s)
Go To Commenting
The views expressed herein are the sole responsibility of the author and do not necessarily reflect those of this website or its editors.