Intentionally or not, the "frenemies" of Medicare for All are sowing confusion about what that really means 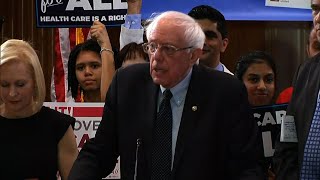 Today, Sen. Bernie Sanders (I-VT) introduced the Medicare for All Act of 2019. A companion bill of the same name has already been introduced in the House by Rep. Pramila Jayapal (D-WA). That's good news for the country. Unfortunately, these bills are facing opposition from what, for some people, will be an unexpected direction.

Intentionally or not, Medicare for All's "frenemies" are sowing confusion about it. Among them is Ezekiel Emmanuel, who argues, "At least four different approaches to health reform could truthfully carry the Medicare for all label."

Why would that be so? The term was crafted by Sanders, Jayapal, and their allies to describe a single-payer system, administered by the government, with no co-payments or deductibles, and without the participation of private insurers.

These plans are Medicare for All decoys. They claim to resemble Medicare for All, at least in their outcomes, but they're not. Each depends on some naive combination of employer cooperation, insurance company goodwill, "smart shopping," and Rube Goldberg-like fiscal contraptions. Each would continue to force working Americans to spend thousands of dollars on premiums, copays, and deductibles, at a time when most families say they'd have trouble finding $1,000 to cover an emergency.

Worst of all, each would allow insurance company cheating, preventable suffering, bankruptcies, and needless deaths to go on year after year.

"It turns out that most people don't really know what Medicare for all means," write Austin Frakt and Aaron E. Carroll. They're speaking, in large part, about health policy types. But health policy experts, of all people, should be able to distinguish between these proposals and the Sanders/Jayapal plan.

The Urban Institute's Linda Blumberg even goes so far as to argue that the "Medicare for All" label is a "misnomer." Speaking to Fierce Healthcare, an industry publication, Blumberg argues that the Sanders/Jayapal program would require a massive new administrative structure, adding: "The idea behind these bills is to eliminate the current Medicare program and put them in something new."

Unfortunately, neither statement is defensible. Medicare's administrative systems are, for the most part, already in place. And it's misleading to argue that Medicare for All would "eliminate" the current Medicare system. It would keep and enhance its positive features, while eliminating the out-of-pocket costs and administrative challenges that bedevil so many of its current recipients. Worse, the word "eliminate" is likely to sow unfounded panic among fearful elders.

Medicare for All would eliminate private insurers from the current Medicare system, which is presumably part of Blumberg's expressed concern. But that isn't likely to be disruptive for enrollees, since the benefits they'll receive under the new plan will be much better than those they currently receive through private insurers -- without the complicated paperwork -- eliminating the need for private add-ons.

Medicare for All's Democratic opponents also attack it on political grounds. They argue that public support for Medicare for All is illusory. That argument largely relies on a survey by the Kaiser Family Foundation (KFF), which found that support for the idea dropped when people learned more about how it would work.

But that poll was highly flawed, for reasons I discussed at length here, and inadvertently misled interviewees about the proposal. (To its credit, KFF has indicated to me and others that it intends to ask better and more detailed questions in the future.)

Related Topic(s): Democratic; Friends; Medicare For All, Add Tags
Add to My Group(s)
Go To Commenting
The views expressed herein are the sole responsibility of the author and do not necessarily reflect those of this website or its editors.