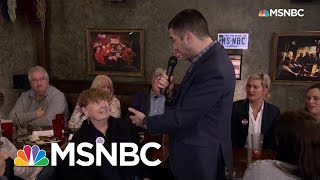 N.H. Voter: I Voted For Sanders Because Of Media's 'Cynical' Coverage Of Him | MSNBC Ari Melber speaks with voters in New Hampshire, asking them who they voted for in Tuesday's primary and why. One voter shares her criticism of MSNBC's ...
(Image by YouTube, Channel: MSNBC)   Details   DMCA

A New Hampshire voter explains that MSNBC cynical coverage of Sanders and his campaign is what tilted the scale to inspire her to vote for Bernie.

Related Topic(s): Media Bias; Media Mainstream MSM; Media Network MSNBC; New Hampshire Democratic Primary 2020, Add Tags
Add to My Group(s)
Go To Commenting
The views expressed herein are the sole responsibility of the author and do not necessarily reflect those of this website or its editors.