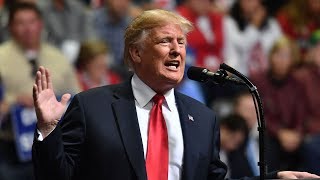 The good news is cable news channels, even including Fox News, no longer treat Donald Trump rallies as must-air events. The bad news is that news outlets still cover the redundant, news-free rallies religiously and in the process help spread unchecked Trump lies. This week he was in North Carolina falsely claiming that "America-hating" Democrats were engaged in "a lot of illegal voting." (False.) "Your way of life is under assault by these people," he warned. Rather than use the rallies to shine a spotlight on his pathological, lying ways, most of the coverage simply regurgitates Trump's misinformation and frames it as legitimate news.

This is a perfect example of how Trump has shredded countless Beltway norms during his presidency, while the media clings to old traditions that are completely useless today. Yes, in the past the we-cover-all-presidential-statements approach made sense. But under Trump? No way. Because he couldn't care less about being truthful and in turn, he uses media coverage to amplify his lies.

Here's a simple fix to the problem: Why don't news outlets pool their sources and send three reporters to the rallies to provide documentation of what Trump rambles on about? That way if something truly newsworthy happens, it will get reported. And while they're at it, news organizations should send a tiny pool of reporters to yell questions to Trump during his so-called "Chopper Talk" sessions on the grounds of the White House. (That's where Trump lies relentlessly in response to shouted questions.) There's obviously no reason why a horde of reporters has to gather at both locations in order to hear Trump aggressively spout misinformation. Note that the "Chopper Talk" sessions and the campaign-like rallies are the two forums that produce the most Trump lies, according to recent CNN research.

Related Topic(s): Donald Trump Lies; Media; Media Collusion; Media Distortion; Media Shills; Trump Rally, Add Tags
Add to My Group(s)
Go To Commenting
The views expressed herein are the sole responsibility of the author and do not necessarily reflect those of this website or its editors.