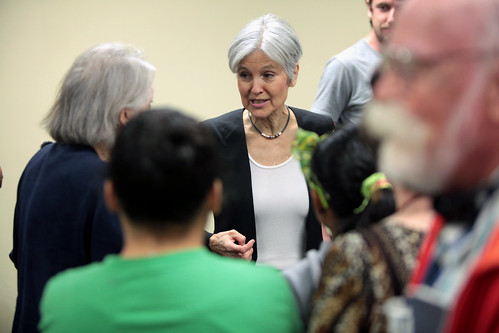 Hillary Clinton's campaign has effectively transformed the general election into a second Republican presidential primary. Each day, there are new headlines reflecting her appeal to GOP officials and former national security agency officials. This is not only because they do not like Donald Trump but also because they see in Clinton a presidential candidate, who they can support without abandoning their principles on American foreign policy.

The first woman Democratic nominee for president is making history by courting individuals once implicated in war crimes, such as Condoleezza Rice and Henry Kissinger. She is simultaneously showing just how disinterested she is in Bernie Sanders, his supporters, and their bold alternative vision.

Meanwhile, the Green Party recently held its national convention in Houston, Texas. The party nominated Dr. Jill Stein for president and Ajamu Baraka for vice president. Stein's selection of Baraka, as well as the party's convention, influenced another round of snide commentary directed at the Green Party for daring to give voters disenchanted by the Democratic Party an alternative to Clinton.

The New Republic published an article with the headline, "The Green Party Has No Shame." Jared Yates Sexton shares his interactions with those who attended the Green Party convention, deliberately creating caricatures of all those who participated. Sexton never quite makes the case that the Green Party has no right to campaign for disaffected Sanders supporters, however, that attitude is explicit throughout the piece.

Why is it shameful for Stein and others within the Green Party to court Sanders supporters?

Sanders made the choice to urge his supporters to throw in their lot with Clinton, even though she stands for the very corporate establishment which the "political revolution" is supposed to challenge. It more than makes sense that, when Sanders will not step courageously into the political wilderness and continue his challenge of establishment politics, the Green Party would turn to Sanders supporters to build their party. After all, it is people who organized for Sanders and experienced the true nature of the Democratic Party as their voices were stifled, who should be at the forefront of growing an alternative political party.

In Sexton's piece, as well as commentary published by POLITICO and the Huffington Post, there was much ado about the fact that Green Party convention attendees ate lunch at McDonald's. The authors of these pieces, in fact, found it hilarious that supporters of a party vehemently opposed to corporations had to eat at a fast food restaurant.

It sounds like the start of a bad joke "- and in a way, it was "- but three Green Party activists actually did walk into a McDonald's on Saturday; specifically the McDonald's in the University of Houston's student center, where the far-left party had convened to nominate physician Jill Stein and human rights activist Ajamu Baraka as its presidential and vice presidential candidates.

It is a bad joke but not because it involves Green Party supporters. Rather, it's a bad joke because the target is working class Americans with left-wing politics, who spend much of their daily lives reasonably concerned with making the United States a better country that is less harmful to the world. One should punch up, not down, especially when engaging in political humor, but then again, these days what liberal journalist has the chutzpah to joke about the power politics of Hillary Clinton's campaign?

The mockery of spotting Green Party supporters at McDonald's is also similar to the mockery directed at Occupy activists when pundits spotted them using Apple iPhones to tweet, post Facebook updates, and grow their uprising. Centrist John Avlon of The Daily Beast lectured in October 2011, "These protesters have the trappings of anarchists with Apple computers--they are earnest and know how to play for the cameras. They have internalized slogans that capture emotions but are too often unrelated to solutions. And that is a lost opportunity."

FOX News host Neil Cavuto joked during one broadcast that same month, "We noticed that plenty of the protesters railing against capitalism on Wall Street, they use a lot of Apple products. Can they have it both ways?"

Kevin Gosztola is managing editor of Shadowproof Press. He also produces and co-hosts the weekly podcast, "Unauthorized Disclosure." He was an editor for OpEdNews.com
Related Topic(s): Jill Stein; Media; Media Complicity, Add Tags
Add to My Group(s)
Go To Commenting
The views expressed herein are the sole responsibility of the author and do not necessarily reflect those of this website or its editors.