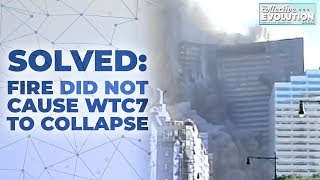 A brand new study out of the University of Alaska Fairbanks has confirmed that there is no possible way World Trade Center 7 could have fallen due to fires.
(Image by YouTube, Channel: Collective Evolution)   Details   DMCA

Many readers have responded to my request to let me know if they come across a report in the presstitute media of the study concluding that WTC 7 fell by controlled demolition. At this time, the only known examples in the US media are a local TV station in Anchorage Alaska and a local newspaper in Fairbanks Alaska (Fairbanks Daily News-Miner).

The online site of the British newspaper Express provides this account.

"There have been no news that I have seen in any paper in Canada on this report."

"I haven't come across a single report on US TV news, and I monitor it daily."

"I have not seen any coverage of the Hulsey UAF report in any media other than social platforms."

"There are NO (-0-) responses to the report by the University of Alaska in the German 'media.' Only a number of alternative online publications is reporting on the study in detail. It's springtime for fascism not only in America, but also in Europe. The masses are deceived with impunity."

Reports on the study are confined to a few alt-news internet sites.

So, here we have a stunning piece of news from experts and it is blacked out. What more proof do you need that you live in The Matrix where what you know is only what those in charge want you to know?

Related Topic(s): Demolition; Matrix; Media Blackout, Add Tags
Add to My Group(s)
Go To Commenting
The views expressed herein are the sole responsibility of the author and do not necessarily reflect those of this website or its editors.