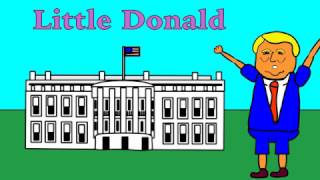 El Presidente needs to feel strong and liked. He wants to feel like a popular man of independent action. He doesn't like feeling weak and hated, like a hemmed-in punk and loser. He doesn't like being told what to think or do by fancy-shmancy know-it-all professor and lawyer types.

Boss Tweet is his own man. David Dennison(the president formerly known as Donald Trump) does things his own way.

This is something that concentrated power structures have to manage.

After the latest National Rifle Association (NRA)-sponsored gun massacre to disgrace the nation -- the terrible assault weapon assault on a high school in Parkland, Florida -- support for gun control s piked to 68 percent, its highest level in 25 years.

At a high-profile televised gun summit in the White House, the longstanding NRA ally El Donito was moved to sound like a leader of that sane super-majority. In an hour-long televised gathering with Congresspersons, Trump freaked out Republicans by voicing openness to a variety of Democratic Party gun proposals. He appeared to embrace a reform package including a prohibition (supported by 77% of Americans) on the "bump-stock" devices that "turn legal weapons into machine guns" (Trump's words), the raising of the minimum age for assault weapon purchase from 18 to 21 (supported by 81%), and a significantly improved system of background checks (supported by 88%).

It even sounded like Trump was ready to call for bringing back an assault weapon ban, which is backed by two-thirds (68%) of the populace.

"Take the guns first, then go to court," Trump said on the topic of crazy people with deadly weapons.

As chiefs of the nation's most powerful fascist and white-supremacist organization, the NRA honchos knew what they had to do. Exerting "grassroots" pressure from outside, the NRA went on the public relations offensive to call Trump's liberal gun moment "surreal" and an un-American -- threat to "freedom" and "due process."

Then the NRA went inside the White House to work on Trump himself. El Donito huddled in the Oval Office with NRA CEO Wayne LaPierre and top NRA lobbyist Chris Cox. LaPierre and Cox certainly reminded Trump of the significant backing the NRA gave Trump in 2016 -- and of the remarkable passion with which its "fifteen million" members will resist even the slightest "socialist" abridgement of their cherished "right to bear arms."

It worked. On Thursday night, NRA leaders triumphantly tweeted that "POTUS & VPOTUS support the Second Amendment, support strong due process and don't want gun control." By Friday, a White House official told reporters it was unlikely the president would push for raising the minimum age for purchasing assault weapons because of a "lack of support" for such a change -- a curious reflection on the citizenry's 81% support for precisely that reform. Trump's scowling press secretary Sarah Sanders announced that "nothing had changed" in the President's views on policy. Thrown into "full scramble mode" by Trump's strange spasm of liberal-sounding comments, the White House failed to deliver on its promise of a comprehensive gun policy package by the end of the week.

Reporters were confused. "Nothing had changed" from what? A CNN report last Friday was titled "No One Knows Where Trump is on Guns -- Perhaps Including Trump."

Beneath Trump's "mixed messages" and the by now standard, "new normal" White House dysfunction lay some harsh political realities. Given the intense personal, cultural, and political hold that guns possess for much of the Republican Party and Trump's heartland, white-nationalist base, a drift "left" on gun policy could cost the president support from a significant component of the small but so far durable group of Americans (from 32% to 40% of the U.S. populace depending on which poll you consult) that has backed him no matter how idiotic, dangerous, and clueless he has shown himself to be. And, so, the orange beast reverted to quiet puppy mode as the NRA won its latest policy shootout at the right-wing Tombstone called Washington DC.

Paul Street (www.paulstreet.org and paulstreet99@yahoo.com) is the author of Empire and Inequality: America and the World Since 9/11 (2004), Racial Oppression in the Global Metropolis (2007), Barack Obama and the Future of American Politics (more...)
Related Topic(s): Child Care; Guns; NRA; President Trump; Tariffs, Add Tags
Add to My Group(s)
Go To Commenting
The views expressed herein are the sole responsibility of the author and do not necessarily reflect those of this website or its editors.