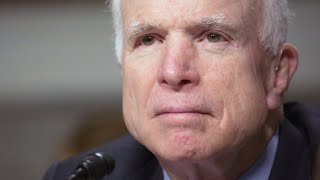 When Sen. John McCain (R-Ariz.) returned to the Senate floor after being diagnosed with cancer he was greeted by fellow senators with a rousing ovation of admiration, respect and goodwill.

McCain's call to arms was for the Senate to return to its historic role as the great deliberative body, to rise above the partisanship and rancor that overwhelms American politics and distorts the Senate today. McCain wants to return the Senate to the regular order of committee hearings leading to a reasoned and respectful debate during which the rights of all senators would be respected, and the traditions of the Senate would be honored.

The traditional role of the Senate has been destroyed in recent years. The Senate is now virtually indistinguishable from the House of Representatives. The founding fathers would be appalled. McCain is right.

By his recent presence, as always, McCain lifted the Senate. Given the fact that the Senate is almost equally divided between the two parties, and given the fact that Republicans now face significant internal divisions, McCain now has nearly decisive influence to determine the outcome in the Senate on many vital issues facing the nation.

In terms of pure vote-counting, going forward, as McCain goes, so goes the Senate. At a time when the Republican president and Republican Congress will not have achieved even one major legislative victory during the first seven months of the Trump presidency, there are thoughtful senators in both parties who want to return the Senate to its historic role as McCain calls for.

There is a dramatic opportunity for a major bipartisan breakthrough to create millions of high wage American jobs to rebuild America through a historic infrastructure bill.

There is a legitimate possibility, if both parties work together and compromise, to enact a significant tax bill.

There is an urgent need for both parties to work together to fix the problems in ObamaCare, ending the wrecking ball tactics of many Republicans, which help Democrats but harm the nation.

John McCain is a man of passionate patriotism who has proven his valor in war and his courage and integrity in peace. The moving applause of his Senate colleagues was authentic, and true, and noble, and a moment to remember about the Senate at its best.

McCain embodies the best of the American past and the potential of the American future, which need not be a future of permanent dysfunction in Washington and political cancer of national division that afflicts the body politic today.

McCain offers the Senate a better way, and may have the moral and political leverage to make good things happen.

McCain lifts the Senate by his noble presence, and I pray he has many more years to make his presence felt. Amen.

Related Topic(s): Bipartisan; John McCain; Republican; Senate; Senate Hearings, Add Tags
Add to My Group(s)
Go To Commenting
The views expressed herein are the sole responsibility of the author and do not necessarily reflect those of this website or its editors.