Reprinted from www.republicreport.org by David Halperin 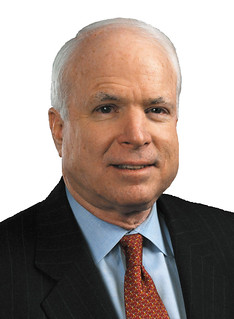 Senator John McCain (R-AZ), in a speech on the Senate floor yesterday afternoon, charged that fellow Senator Dick Durbin (D-IL) has "orchestrated" a "shameful " vendetta against for-profit universities." McCain upped the ante by asserting that Durbin has a "well-known record of not supporting the men and women who are serving in the military." Alleging a larger conspiracy, McCain repeated accusations in a recent Wall Street Journal editorial that "the Obama Administration's military tribunal is punishing" the biggest for-profit college, the University of Phoenix "for being a target of the political left" and that "General Durbin has commanded the Education Department and Department of Veterans Affairs to 'take appropriate action' against the company. Bombs away."

In fact, it is McCain, by using his power as chairman of the Senate Armed Services Committee to pressure the Department of Defense to back off a legitimate investigation of the University of Phoenix, who is doing a disservice to service members and veterans, who deserve to be protected against deceptive recruiting, poor quality programs, and other predatory practices.

In his own floor speech yesterday, Durbin encouraged the Pentagon to continue its investigation. Durbin noted that Paul Rieckhoff, founder and CEO of Iraq and Afghanistan Veterans of America, said that the University of Phoenix was the "worst by far" for-profit college in terms of taking advantage of the vets who are members of his organization.

Remarkably, McCain, in his speech, defended not only his home state-based University of Phoenix but also the disgraced, collapsed Corinthian Colleges. Even some for-profit college executives stopped defending Corinthian after it shut down; they started saying Corinthian was the one bad apple in the bunch. But McCain repeated the Wall Street Journal claim that the U.S. Department of Education, the Consumer Financial Protection Bureau, and California attorney general Kamala Harris "mounted a coordinated campaign that drove for-profit Corinthian College out of business." McCain claimed these agencies acted "without any proof of misconduct."

Poor, poor Corinthian Colleges, which, before it shut down earlier this year, had been receiving as much as $1.4 billion a year in taxpayer dollars. Twenty state attorneys general, Democrats and Republicans, along with the Department of Education, the CFPB, the Securities and Exchange Commission, and the Justice Department, have all been investigating or have sued Corinthian for fraud and other misconduct.

And poor, poor University of Phoenix, which has been receiving as much as $3.7 billion a year in our tax dollars. Four state attorneys general, Democrats and Republicans, along with the Department of Education, the CFPB, the Securities and Exchange Commission, and the Federal Trade Commission, as well as the Pentagon, have all been investigating or have sued Phoenix for fraud and other misconduct.

Yet, according to McCain, "it is obvious what this is really all about. This is all about the constant attacks on for-profit colleges, which is an anathema to some."

All of those professional law enforcement staffers must be spending all those hours in pursuit of some ideological agenda, at the behest of the political left. Really?

Maybe instead it's about evidence developed by all those many law enforcement agencies.

McCain correctly pointed out in his remarks that investigations, allegations, and lawsuits are not proof of guilt. But high-priced corporate lawyers for this wealthy industry have been expert at fighting criminal and civil actions tooth and nail. Where the proof of guilt is strong, they will settle with prosecutors for some cash and promises to do better, but always demand that the settlement include no admission whatsoever of wrongdoing. Short-handed government lawyers tend to accept those terms.

Nevertheless, there is plenty of evidence -- from congressional investigations, media reports, and student accounts -- of abuses by the University of Phoenix, Corinthian, and other big industry players like ITT, EDMC, Kaplan, Career Education Corp., Bridgepoint, and CollegeAmerica -- all of them now also facing multiple law enforcement probes.

After years of ignoring the abuses, law enforcement agencies and overseers like the Pentagon, VA, and Department of Education are stepping up to protect students, and that's a good thing.

And, notwithstanding what McCain said in his Wednesday speech, a day earlier a federal district court in Chicago did make findings that Corinthian had engaged in unlawful acts. The judge, Gary Feinerman, granted the CFPB's motion for a default judgment in its lawsuit against Corinthian, which decided to stop defending itself.

Judge Feinerman reviewed the CFPB's evidence and concluded that Corinthian violated the Consumer Financial Protection Act of 2010 "by misrepresenting career prospects and career services available to Corinthian students and prospective students in order to induce them to enter into Genesis Loans" -- private student loans created and marketed by Corinthian. The court further found that Corinthian had violated the law by "by causing substantial injury to Genesis Loan borrowers by barring or pulling them from class, withholding educational resources, and otherwise preventing them from gaining access to educational courses or materials for which they had already paid, in order to pressure them to pay their Genesis Loans" and "by engaging in harassing, oppressive, or abusive conduct against Genesis Loan borrowers in connection with the collection of debts from the Genesis Loans."

The judge ordered Corinthian to pay $531 million in restitution to the students. Of course, Corinthian, despite the $1.4 billion per year in our tax money, is in bankruptcy court and says it has no money.

David Halperin (@DaHalperin) engages in public advocacy and advises organizations on strategy, policy, politics, communications, and legal matters. He is of counsel to Public.Resource.Org. He was previously: founding director of Campus Progress and senior vice president at the Center for American Progress; senior policy advisor for Howard Dean's presidential campaign; founding executive director of the American Constitution Society; White House speechwriter and special assistant for national security affairs to President Clinton; co-founder of the Internet company RealNetworks; and counsel to the Senate Intelligence Committee. He graduated from Yale College and Yale Law School. His articles have appeared in the New York Times, Washington Post, The Nation, Politico, Foreign Policy, and other outlets.

David Halperin's pieces on Republic Report also appear on Huffington Post -- http://www.huffingtonpost.com/davidhalperin/. Support for David Halperin's work for Republic Report on higher education issues has included grants from the Ford Foundation, The Institute for College Access & Success, and The Initiative to Protect Student Veterans and Center for Public Interest Law at the University of San Diego.
Related Topic(s): For Profit Colleges Universities; John McCain; McCain-John, Add Tags
Add to My Group(s)
Go To Commenting
The views expressed herein are the sole responsibility of the author and do not necessarily reflect those of this website or its editors.

After Comey: How To Be a Patriotic Insider

Trump is a Crook; House Should Start Impeachment Probe