Bernie's says the Straightest Path to Racial Equality Is Through the One Percent. Perhaps the straightest path is through the Ninety-Nine Percent. 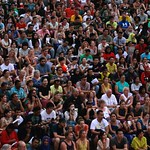 Bernie says that he couldn't agree more. Au contraire mi petite bon ami. He could agree more by completely agreeing with Frederick Douglass' "What to the Slave is the Fourth of July?"

Douglass while indirectly acknowledging the status quo fully implemented by what I believe to be the 1% of his mid 19th-century countrymen, was in my opinion actually addressing the 99%. It is the 99% who allow the 1% to rule, to create laws for us but not them to abide by, who own the national treasury usurped from the people while systematically plunging us into poverty over the past 40 years. We supported 67% of the US economy for as long as we were told and made proud to go out and shop! Now we are shopped out and can barely give our material crap away... it is worth less.

Douglass gives the US Constitution a pass including the founding fathers. What does not get a pass are the legislatures that the 99% fail to overthrow, a court system that then as now should have been dismantled. He is speaking to the 99% including so called christians who deluded themselves then and fail to see today that they are also subject to a Fugitive Slave Act... slowly tightening the noose and ready to Assange all of us.

Douglass says of the courts, "The minister of American justice is bound by the law to hear but one side; and that side, is the side of the oppressor. Let this damning fact be perpetually told. Let it be thundered around the world, that, in tyrant-killing, king-hating, people-loving, democratic, Christian America, the seats of justice are filled with judges, who hold their offices under an open and palpable bribe, and are bound, in deciding in the case of a man's liberty, hear only his accusers!"

Of the Christian Church and fellow Americans, "Fellow-citizens! I will not enlarge further on your national inconsistencies. The existence of slavery in this country brands your republicanism as a sham, your humanity as a base pretense, and your Christianity as a lie. It destroys your moral power abroad; it corrupts your politicians at home. It saps the foundation of religion; it makes your name a hissing, and a by word to a mocking earth. It is the antagonistic force in your government, the only thing that seriously disturbs and endangers your Union. It fetters your progress; it is the enemy of improvement, the deadly foe of education; it fosters pride; it breeds insolence; it promotes vice; it shelters crime; it is a curse to the earth that supports it; and yet, you cling to it, as if it were the sheet anchor of all your hopes. Oh! be warned! be warned! a horrible reptile is coiled up in your nation's bosom; the venomous creature is nursing at the tender breast of your youthful republic; for the love of God, tear away, and fling from you the hideous monster, and let the weight of twenty millions crush and destroy it forever!"

I confess my dismay at the huge flags and the little bitty ones too, scattered willy nilly. I don't think the celebration is as full fledged as it once was... Where I live a huge military-transport plane circled overhead several times, demonstrating a total lack of discernment by its perpetrators of our agony on the ground in our pitiful no-wage and low-wage jobs over the extortionist waste of our treasure for pure bullshit.

On the other hand I do agree with Bernie, that, The Straightest Path to Racial Equality Is Through the One Percent, but that it is not about race, it is about who we want to be as a species, travelling on this great ship... and of course the other thing is, I believe we have given peace enough of a chance.

Related Topic(s): Awakening; Change; Manipulation, Add Tags
Add to My Group(s)
Go To Commenting
The views expressed herein are the sole responsibility of the author and do not necessarily reflect those of this website or its editors.