My guest today is psychotherapist and writer, Lori Gottlieb, author of the new book, Maybe You Should Talk to Someone: A Therapist, Her Therapist, and Our Lives Revealed , Houghton Mifflin Harcourt, 2019.

Joan Brunwasser: Welcome to OpEdNews, Lori. Your career trajectory has included journalism, writing, television and, later, therapy. Do those disparate fields share any common threads and how have your various professional interests ultimately made you a better therapist?

Lori Gottlieb: It may look like these careers were completely separate, but in retrospect, I've realized that they all have to do with story and the human condition. I went from shaping fictional stories for film and television, to immersing myself in real stories in medical school, to telling people's stories as a journalist, and finally, to helping people change their stories as a therapist. My writing background is helpful to my work as a therapist, because I often feel like an editor when I'm seeing patients. People come in with faulty narratives, ingrained stories that need an update--who are the heroes and villains? Is the protagonist going in circles or moving forward? Is there a theme running through the narrative that's preventing the main character from getting what she wants? I work with people to revise their stories so that the next chapter goes differently. I try to show what this looks like by following the four main patients in Maybe You Should Talk To Someone--and I bring people into my own therapy so they can see how my personal story got a major rewrite as well!

JB: I'm a big proponent of therapy - it can be life-changing and also, upon occasion, a life-saver. A major ingredient of therapy, perhaps the most important one, is the relationship between therapist and patient. The therapist often presents as pretty much a blank slate, for numerous, legitimate reasons. And yet you purposefully chose to proceed in an unorthodox fashion - by breaking that barrier and revealing many private aspects of yourself as well as your own therapy. Were you ever concerned about perhaps revealing too much about yourself, that this could potentially damage your reputation as a therapist, going forward? Did your gamble pay off? If yes, how can you tell?

LG: I think that there's a difference between revealing yourself in a book and revealing yourself in a room with your patients. I use my personal experiences every day as a therapist--I say in the book that my greatest credential is that I'm a card-carrying member of the human race--but that doesn't mean I'm sharing any personal information to my patients. It simply means I'm using my humanity to connect with and help someone else in the room. In the book, I'm sharing my story alongside the others because I felt it would be disingenuous to portray myself as the expert up on high when, in fact, we're all more the same than we are different from one another. And I think knowing that makes us feel less alone and more connected. Did I wonder if people would choose not to call me for therapy if they read the book? Of course. I was surprised to find, though, that the opposite happened. People connected with my humanity, and I think that we all want a therapist who's a real human being. Nobody wants to talk to a robot. 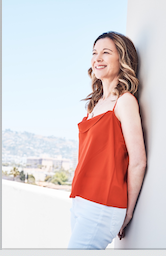 JB: Agreed. Was it challenging to use case histories while being careful to protect patient privacy and confidentiality? I'm sure that you gave a lot of thought to choosing what to highlight and how to do so. Can you share more about the process, please? What were you trying to share with your specific choices?

LG: I wanted to choose four very different patient stories. Of course, there are many stories in the book, but the four main stories involve people who seem very different on the surface in terms of age, gender, personality, background, reason they came to therapy, etc. And they also seem different from me--I'm the fifth patient in the book as readers see me go through my own therapy while my patients go through theirs. I wanted people to see how universal our struggles are, how similar we are underneath it all. And I that comes across so much more strongly when we're surprised by how different each person is at the end from how they seemed at the beginning. So I was very deliberate in which patients I chose. And, yes, I had to be very careful to change anything that would make anyone identifiable, especially in this age of Google. I wasn't just careful with my patients, but with everyone in the book. There's even this moment in the book in which I quote someone's review on Yelp, and to protect that person's privacy (someone I don't know and who's not a patient of mine), I change a very specific noun in her review to a more generic one. But in each instance where I change something, the spirit of the story hasn't changed. I was also aware of preserving the truth of the story, even if the details were changed to protect people's privacy.

JB: You've been on a book tour promoting Maybe You Should Talk to Someone. After all these talks and book-signings, have you noticed any commonalities in the questions that people ask? You've written numerous books over the years. How does the response to this, perhaps your most personal book, differ and if it does, has that surprised you?

LG: It's interesting, because most people find that the book has made them think a lot about themselves and see themselves in a new light. So when we open it up for Q&A at book tour events, so many people either want to ask something about their own lives, or they want to share how something in the book was particularly meaningful for them. Sometimes people want an update on my life, or on the lives of the people they've become invested in and attached to in the book. But mostly, honestly, it's about them. Which is exactly why I wrote the book. It's so gratifying, because I always hoped that reading the book would almost be like the equivalent of free therapy, and if I'm helping people in some small way, I feel like, mission accomplished!

JB: Nice! Writing a book is a big deal. And the more personal it is, I imagine, it takes more out of the author. Are you any different after having written this book? If so, how?

LG: Writing about these experiences helped me see connections between the various patients' stories and mine in a way that I hadn't initially seen, and also made me think more deeply about how going through therapy with Wendell, my therapist, helped me to grow as a therapist myself. The writing solidified the gains and held up a mirror to my experience in the same way that I hope I hold up a mirror to my patients, to help them see themselves more clearly. Writing often provides that extra layer of clarity.

JB: Your book has definitely struck a chord with many readers, Lori. Everyone's talking about Maybe You Should Talk to Someone: A Therapist, Her Therapist, and Our Lives Revealed. I highly recommend it. In fact, it's circulating within my own family and my daughter is reading my copy right now! Thanks so much for talking with me. It was a pleasure.

Lori Gottlieb is a psychotherapist and New York Times bestselling author of Maybe You Should Talk to Someone, which is being adapted as a television series with Eva Longoria. In addition to her clinical practice, she writes The Atlantic's weekly "Dear Therapist" advice column and contributes regularly to The New York Times. She is on the Advisory Council for Bring Change to Mind and has appeared in media such as The Today Show, Good Morning America, The CBS Early Show, CNN, and NPR's "Fresh Air."

Related Topic(s): Author; Interviews; Journalism; Patients; Psychotherapy; Psychotherapy; Reviews_ Books; Writing, Add Tags
Add to My Group(s)
Go To Commenting
The views expressed herein are the sole responsibility of the author and do not necessarily reflect those of this website or its editors.